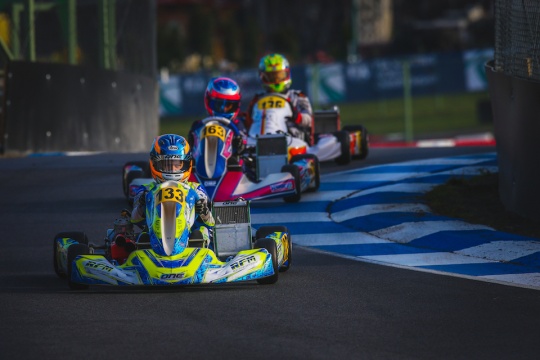 At the Mika Salo Circuit, the Ricky Flynn Motorsport driver showed great ability in adapting to weather conditions, conditions that changed several times over the weekend.

The Dutch driver's World Championship weekend started with 4th place in his qualifying group, resulting in pole position for the G group of heats. In the 6 heats held between Saturday and Sunday, van Hoepen also earned two wins, but the detached spoiler in the last race on Saturday increased his "penalty points", sliding him back into the 3rd row on the Final starting grid.

A sudden rainfall that preceded the start of the Final made the asphalt extremely slippery and, despite van Hoepen taking all the possible risks to attempt the assault on the podium, he finished in 8th position.

Laurens van Hoepen, RFM (FA/Vortex): “It’s been a bittersweet weekend for me. It all began with good Qualifying Practices. The good pace I had in the qualifying lap was confirmed in the heats. Just that in Sunday’s last one I took a bumper penalty, but on the whole it was a good series. I’m quite disappointed for the pace in the Final, but that’s racing. I really want to say thanks to everybody at Ricky Flynn Motorsport, especially to my mechanic Jack.”

The next race is planned at the end of October at the South Garda Karting on the occasion of the WSK Open Cup.