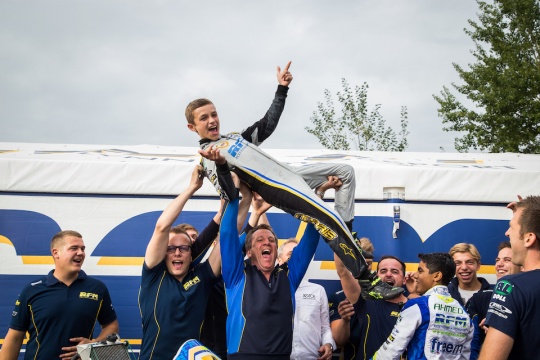 Author: Vroomkart International
What's about the worst karting race of Lando Norris? Discover this story about the current McLaren F1 driver.
Funny on social media and talented on track: despite he’s at his first year in Formula 1, the McLaren’s Lando Norris is one of the most appreciated driver on grid.

But who was Lando Norris in his karting ages? He raced with Ricky Flynn Motorsport and he’s still the youngest senior CIK FIA world champion. This just to say that his talent was pretty clear since his karting ages.

As every drivers, also Lando had (at least) a race to forget that still today causes pain to him. It’s the last act of the 2013 European KFJ Championship placed in Ortona.

«My worst race ever was the final round of the European Championships in KF3 at Ortona» Lando told us. «I was forced off the track several times and ended up pitting half-way through the race as I was so far behind. My mechanic told me to keep going as I was level on points with two other drivers and this was a key moment in the championship».

«So I carried on, ended up finishing last but still won the championship because although we drew, I had the best results on countback because I finished the race. And I was crowned European Champion!»

But you will also remain amazed to discover that his worst year was also… the year of the World title victory.

The 2014 was a bad year for me! It wasn’t a super strong season because I was leading the final of the European Championship when my engine seized and I ended up having a DNF and only finishing third.  Other than that, the only good result was the World Championship. But it was a great year for the whole team».