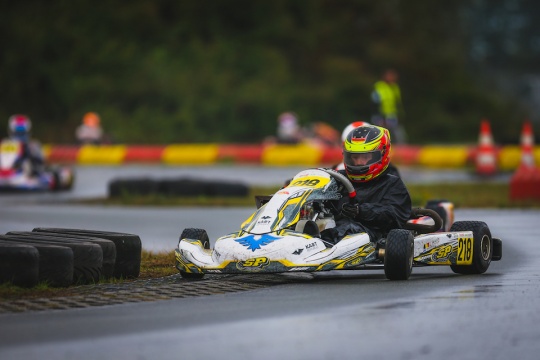 Press Release by: Tom Braeken
Braeken proved his comeback-skills in Berghem.
Tom Braeken made himself the protagonist of an embattled weekend in the combined round of the Belgian MAX Challenge and the Chrono in Berghem.

With complex climatic conditions that alternated between showers and sunshine, Braeken was forced to make a great comeback in the Final.

His weekend started with a P10 out of 36 qualifiers, a result that he came close to in the Prefinal where he ended 14th. It was in the Final, however, that he bested himself: Braeken, in fact, after a difficult start, managed to recover as many as 13 positions, finishing in 12th position after a slight stall in the engine had caused him to drop as far as P25.

Tom Braeken, SP Motorsport: «Challenging. That's how I'd define this race. We ran in all conditions and, except for the start of the Final, we always had our say. The start of the Final was also useful, as I was able to test my comeback skills. What to say? The teachings of Stan and Senna, and dad's help, are bearing fruit.»

Braeken is already on track in Le Mans for the Rotax MAX Challenge International Trophy, this time in Mini.