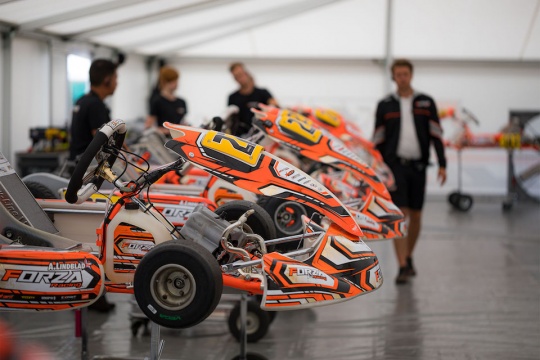 Forza Racing was present with 7 drivers, of which 4 in Junior: Arvid Lindblad, Rafael Camara, Enzo Peugeot and XizhengHuang; and 3 in Senior: Dilano van T’Hoff, Matias Zagazeta and Gilles Stadsbader.

Despite the excellent work by the drivers, especially the Seniors, the weekend started on an uphill battle due to the decision to extend the time between the 4 rounds of Qualifying Practices. This led some drivers to run in a group and time with optimal grip, and others less so. This is the case of van T’Hoff, who, despite being 3rd in Group 3, was 25th overall.

This variable influenced all day Saturday, calling drivers to make that extraordinary and proverbial extra effort and to take numerous risks.
OKJ - Lindblad and Camara in top10

Arvid Lindblad, P7- After the promising prologue of the FFSA French Championship round three weeks ago, Lindblad was among the favorites for the final victory. His weekend started with P7 in qualifying, but he soon took flight in the heats with 2 wins and 1 second place. A retirement and an 18th in the remaining two sessions, due to a slow puncture and an inconvenience, prevented him from contending for pole position. Started from 17th place, the British driver then recovered 10 positions to P7.

Rafael Camara, P10- In his first weekend with Forza Racing, Camara was able to carve out a first-rate role immediately. Always in the top 10 in the heats, only a withdrawal prevented him from starting in the front rows, but still in the top 10. He was 10th under the Finale's checkered flag.

Xizheng Huang, NQ- Less than 10 penalty points prevented Huang from entering the Final. The Chinese driver gained as many as 17 positions from qualifying to the heats, yet it was not enough to reach the qualification.

Enzo Peugeot, NQ- Due to an unlucky qualifying, despite the efforts of the team and the driver himself, Peugeot failed to enter the Final. The great amount of work carried out and the experience gained in view of the World Championship still, however, remain.
OK - Van T’Hoff grabs top10, Zagazeta recovers 11 positions

Dilano van T’Hoff, P8 - His weekend started with P3 in his group and the 25th overall in qualifying. Thanks to a pace always among the fastest, the Dutch driver managed to recover 9 positions in the heats, earning him the 8th row on the starting grid of the Final. In it, then, his potential emerged once again and he recovered 8 positions to finish in P8.

Matias Zagazeta, P22- Both in qualifying and in the heats, the Peruvian driver was always in the "final zone", that is the first 34 positions, but it was precisely in the Final that there was a noticeable change of pace. In fact, in the 22 laps of the race, Zagazeta recovered 11 positions to close in 22nd place.
Gilles Stadsbader, NQ- The Belgian was the protagonist of a subdued weekend, also due to a qualifying session that didn't go well. Stadsbader, for his part, once again demonstrated his sagacity in trying to make gains enough to guarantee access to the Final, but – alas - failed in his intentions.

Jamie Croxford, Team Principal: “Once again I can say that I am very happy with the work that my drivers and my staff have done. Many of them found themselves having to drive through the pack, make gains, but this did not demotivate them at all. In this first part of the season I have seen immense growth from everyone, which bodes well for the future.”

The team will now start the preparations for the FIA Karting World Championship.