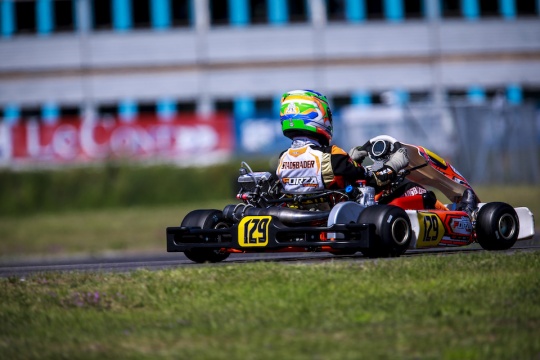 On the track near the 24 Hours of Le Mans temple, the team will try to give continuity to the excellent results of the last 3 races where it took home 3 victories and a 3rd place in OK and OKJ.

4 drivers will be defending Forza Racing's colors in France with Arvid Lindblad, winner of the Lonato round of the WSK Euro Series and the FFSA French Championship round of 2 weeks ago in Le Mans, plus Enzo Peugeot, Xizheng Huang and Rafael Camara on his debut with the team.

In Senior, instead, there will be 3 team drivers, namely Dilano van T'Hoff who, two weeks ago, despite having missed all the pre-event tests, amazed everyone by showing one of the most consistent paces of the lot; also running, Gilles Stadsbader and Matias Zagazeta, both called to make up for the unfortunate epilogue of the test race.

Jamie Croxford, Team Principal: «The results of the last races have been encouraging. We are in a good moment. In the Le Mans test race we collected a lot of data, which will be the basis of the work we'll do this weekend. All the guys are doing a fantastic job and we're looking forward to the event to officially start.»

As is usual in the FIA ​​Karting races, the event will officially start on Friday with Free and Qualifying Practices, then the heats on Saturday and Sunday morning with the Finals on Sunday afternoon.