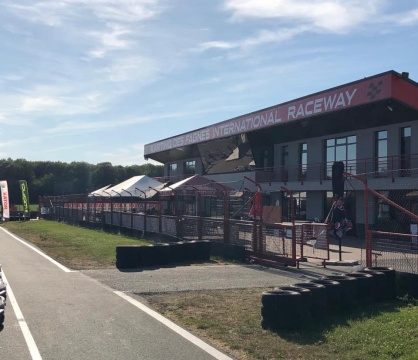 Author: Vroomkart International
Exciting competitions at the Karting des Fagnes during the BNL Karting series round 2.
Karting Des Fagnes, based in south-east Belgium, would host what would be an exciting second round of the 2019 BNL Karting Series season this past weekend, with drama and great action being the stand out of the racing.

In Micro Max, Tommie Van Der Struijs now only has a 15-point lead, as the points leader didn’t pick up a single win during proceedings.

But countryman Kasper Schormans in the #40 won the weekend with three victories, closing the gap significantly at the 1388-metre circuit.

The #19 of Max Sadurski also picked up his maiden win of the season in Final number two, but is just four points behind GKS Lemmens Power’s Thomas Strauven in the fight for the title, with the top four separated by 40 points heading to the finale in October at Karting Genk.

Mini Max saw Tim Gerhards keep his lead in the standings, after a difficult start to day one at Mariembourg.

The #50 would end up second best to Jayden Thien in the #107 (NED), as the latter stormed off into the distance on day one by securing pole position and both race wins.

The tables would be turned on the final day, as Tim would fight his way back to the front of the field, with Thien swapping the lead with him on race three.

This was before the #107 was involved in two separate incidents in the final race of the weekend, putting him way down the order, thereby extending the gap to Gerhards to 34 points.

Enzo Bol battled his way to third in the standings by the end of the weekend, using consistency to take a run of second and third places over all four races, after battling with the likes of Jens van der Heijden, Nick Gerhards and Teun Schmidt throughout the weekend.

This was after contact between himself and Matthew Higgins at turn four on lap five, which forced the 14-year-old to retire on the following lap, having been swallowed up by the field to end up outside the top ten by turn three of the first lap.

But his drive from 23rd on the grid to win the last final was something that needed to be seen to be believed.

However, he would end up runner-up behind GKS’ Thom Reinhardts, who was impressive all weekend and took his first Junior Max win in BNL when Van Vugt retired.

Daniel Guinchard from Persistence Motorsport would take third in the weekend rankings, after a difficult last race, where the Briton would have to start from the dummy grid after the race was red flagged.

But he is just 15 points behind Kris Haanen (264-NED-Coles Racing) in the standings, as the Dutch driver only got as high as third in the final exciting race.

Senior Max has a very different outlook post-Mariembourg, as Clayton Ravescroft again only picked up one race win during the weekend, as he did back in the season opener in Genk. However, the Briton now leads by just seven points, amidst his fair share of troubles in both race one and three.

Belgium’s Dylan Lahaye started in fine style, taking pole position and also racking up two wins on the first day, before consolidating a strong weekend with a second and third place, hitting the top step as the winner of round 2.

Bouvin Power’s Ilian Bruynseels would have a weekend to forget, only taking a best place result of fourth in the first of four races, and scoring no points in the last one. The 16-year-old Belgian now drops to third in the standings, 33 points behind Ravenscroft, with Scotland’s Lewis Gilbert just seven points adrift in fourth in the standings.

DD2 sees a new points leader in the form of Greece’s DJ Liveris from DAEMS Racing team, as the #436 would storm to the finish in the first three races, having fended off David Rehme, Sebastien Degrande and Jarne Guessens amongst others.

Defending champion Xander Przybylak may be on the back foot after the visit to Karting Des Fagnes, as he was deemed to be too aggressive with his driving in race one, where he was excluded.

The Belgian was able to exercise damage limitation to come back from the exclusion to win the last race of the weekend, passing Liveris with just a few laps remaining.

Rehme remains in third in the standings, 45 points behind Liveris and 32 behind Przybylak, whilst Degrande and FM Racing’s Jan Schwitter complete the top five.

Carl Cleirbaut has one hand on the crown in DD2 Masters, as the “Fastest Baker in Flanders” was pretty much untouchable, as he continued a 100 percent winning streak, having won all eight races thus far, putting him on a maximum score of 200 points.

Britain’s Tamsin Germain had a good show consistency, taking three second place finishes and a third to keep her ahead of Christophe Adam and Kristof Lijnen in the fight for second place in the standings.

The trio are separated by only 40 points, ahead of Michael Becker from RS Competition, who along with Patrick Weinstock, was not present at the meeting.

The BNL Karting Series will conclude its 11th season at the “Home of Champions,” Karting Genk, on the first weekend of October (5th and 6th.)
A.Goldschmidt