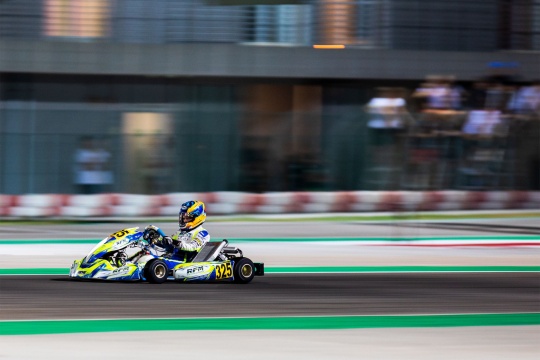 The Dutchman was among the stars who most shone on Adria's "European" nights. His weekend started with 5th place in his qualifying group, the first. 5th place which was transformed into the second absolute at the end of the Heats; this placed him in pole position in the Prefinal B.

The latter filed away with 2nd place, just a whisker from the first, in the Final, starting from the 2nd row, van Hoepen fought for a long time for the podium and then closed 4th. This result allowed him to gain several positions in the WSK Euro Series absolute ranking, finished in top 10, in 7th position.

Laurens van Hoepen, RFM (FA / Vortex): «It was a unique race in its genre, considering that it took place at night. It was a great challenge with extreme asphalt and climatic conditions. Overall we were fast and the 4th position is a good result. But now it is time to concentrate full-time in the last race of the FIA European Karting and then in the tests for the World Championship of Alaharma.»

After his school commitments, Laurens van Hoepen will fly to Le Mans in France to prepare the last round of the FIA ​​Karting European Championship.