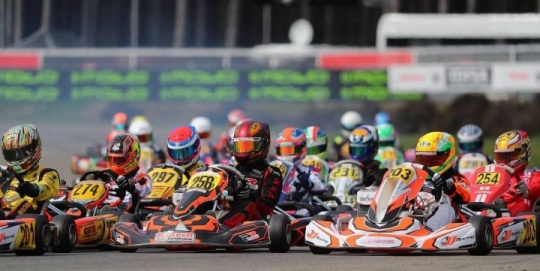 Author: Vroomkart International
After a very lengthy wait, 16 weeks to be precise, the 2019 BNL Karting Series season continues on its trek to decide some new champions when the campaign continues at Karting Des Fagnes International Raceway, based in south-east Belgium.
After a hefty 160 drivers over 8 classes took part in what was an exciting season opener at the”Home of Champions” in the latter part of March, the halfway point of the season brings a new challenge, after the series organisers decided to change things up for the 11th season of the series’ history.

The 1,388 metre circuit will play host to over 100 drivers, represented by drivers from 14 countries, which even includes Azerbaijan. With the entire field split over 6 different classes, all powered by the ROTAX roar, they will head into battle over two days of close-fought, hard-charging action, as the title protagonists will be more than happy to show their hand.
The battles in the relevant classes are heating up, with four drivers leading their categories to have had a perfect score of four wins thus far.
Micro Max has Holland’s Tommie Van Der Struijs in the #54 leading the way coming into this round, with the next best placed driver being Max Sadurski, 32 points adrift, with a very close battle between the young Dutchman, GKS Lemmens Power’s Thomas Strauven and Kasper Schormans for the ‘best of the rest’ top spot, as the trio are split by just a a mere eight points.

But the best placed driver after the conclusion of the last final on the Sunday afternoon will see one more Micro Max driver head to this year’s Rotax Max Challenge International Trophy at Le Mans this coming August, but as both Van Der Struijs and Sadurski have already won their entries, that place is fair game in Mariembourg.
The flying Tim Gerhards is trying to break away from the rest of the contenders in Mini Max, as the #50 came back from a disaster at the Kick-Off back in late February to repeat the same feat as Van Der Struijs in Micro, but Jayden Thien is hot on his back bumper to get closer this coming weekend, finding himself 20 points adrift. Don’t count out 2018 BNL Golden Trophy runner-up Enzo Bol either, as he is only a further 16 points off the leader, amongst others.

Defending Junior Max class champion Mike Van Vugt, also got his title defence with JJ Racing off to a fantastic start, as he would be tested considerably by former team mate and countryman Kris Haanen, who will be looking to fight back, as will Daniel Guinchard, who has been racing over multiple campaigns, including the Motorsport UK British Kart Championships and the ROTAX Max Euro Trophy, having recently switched to Persistence Motorsport.

The Senior Max division will provide the customary fireworks, especially when it comes to Rotax, and the title fight that has started to gain momentum is only split by 18 points between the top three. KR-Sport’s Clayton Ravenscroft, who was runner-up last year to now Carlin British F4 driver and OTK works driver Joe Turney, has the target on his back, in terms of the standings, and only has a narrow three point lead so far.
Belgium’s Ilian Bruynseels will be relishing the chance to overtake the Briton in the overall standings, but will not need to go for a ROTAX Grand Finals ticket, as he secured that earlier on this season, having won the Euro Trophy Open in Genk on the Easter Bank Holiday weekend.
Last year’s Super One British Senior Rotax champion, Charlie Turner, has turned his attention to continental Europe this season, and is not that far adrift. He could very well be a dark horse that could blow things wide open.

A slight blip at Genk for defending DD2 champion Xander Przybylak, thanks to a second place finish in in race three in Limburg, didn’t stop the Bouvin Power driver from getting his title defence off on the right foot, as his nearest rival, Greece’s Dionisis Liveris is 31 points away from getting to the top of the standings.
Dan Holland Racing’s David Rehme, who completes the top three, just three points off Liveris, was the driver that took the clean sweep away from Przybylak, and the Swede has impressed, having moved up from Senior Max last year.

The “Fastest Baker in Flanders,” Belgium’s Carl Cleirbaut, leads DD2 Masters heading to the Couvin municipality with a perfect record of four wins so far, but the German pair of RSC Competition’s Michael Becker and FM Racing’s Patrick Weinstock complete the top three in standings.
But with the latter duo not entering the Mariembourg race weekend, keep your eyes on the likes of Tamsin Germain and Christophe Adams to factor into the DD2 Masters scrap in south-east Belgium.
The scene is set and the action awaits, so how can you tune in to all the action as it happens?

The second round of the 2019 BNL Karting Series season will be fully live-streamed, thanks to Camp Company GmbH, whilst Downforce Radio will be providing full audio stream coverage via Spreaker over the course of the weekend LIVE and DIRECT from the track, with commentary provided on both days by Alex Goldschmidt.