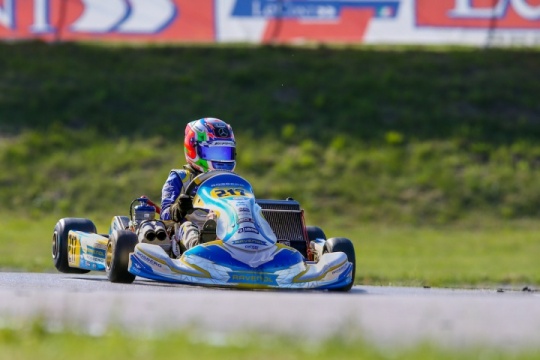 60 Mini - In Al Dhaheri (Paorlin) 2nd place was enough, considering that the number 1 opponent for the crown, the Briton William Macintyre (Team Driver), did not go beyond the 9th place in the Final. Dmitriy Matveev (Energy) was the first to cross the finish line in a "flawed" race due to the accident involving the Bulgarian Nikola Tsolov (Team Driver), accompanied on the podium by champion Al Dhaheri and Kirill Kutskov ( Energy). 4th and 5th place for the Italians Francesco Marenghi (Revolution) and Andrea Filaferro (Newmann).

OKJ - Victory in solitaire for Antonelli, ruler of the race, who joined Lando Norris in the Euro Series hall of fame. The Rosberg Racing driver put behind the Ricky Flynn trio led by Thomas Ten Brinke and completed by Ugo Ugochukwu and Laurens van Hoepen, who in the final seemed to have the cards to gain on his teammate. 5th Artem Severiukhin (Ward Racing).

OK - The head-to-head between Gabriele Minì (Parolin) and Kirill Smal (Ward Racing) ended to the advantage of the sicilian. To complete the podium the Forza Racing driver Dilano van T’Hoff, able to gain 4 positions with respect to the start. The top 5 is completed by champion Lorenzo Travisanutto (CV Performance) and a rediscovered Taylor Barnard (Rosberg Racing).