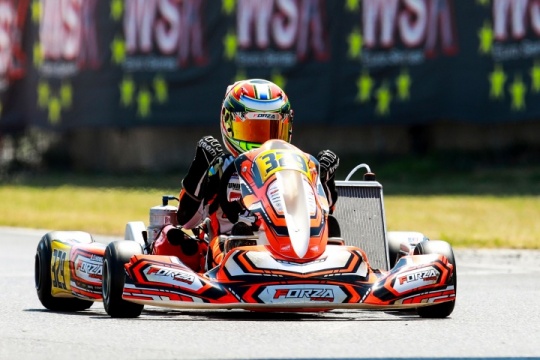 Press Release by: Forza Racing
First victory for Arvid Lindblad in OKJ at the South Garda Karting of Lonato.
A fully satisfying weekend for Forza Racing in Lonato on the penultimate act of the WSK Euro Series, where it won in OKJ with Arvid Lindblad.

The team's positive feelings, however, are also linked to the remarkable pace shown throughout the entire weekend.

In his first year with OKJ, Lindblad shows the hard work he has put in with the team pays off, bringing home a win. His weekend, which started with P4 in Qualifying Group 3, was a continuous improvement and the move to mounting only two new tires in the Prefinal guaranteed a better performance.


Dilano van T’Hoff also did well. The Dutchman began his journey with 6th place in the first qualifying group, improving considerably during the heats. An accident of which he was innocent unfortunately thwarted his efforts, forcing him to start further back than he deserved in the Prefinal B, where he finished 5th, and was the driver with the best pace of the race. In the Final, then, thanks to the same tire strategy adopted by Lindblad, he was able to gain another 4 positions to close 6th overall.

Jamie Croxford, Team Principal: «It was a really satisfying weekend for me and the whole team. Seeing Arvid on the top step of the first year in Junior pays off all the efforts we have made so far. Also Dilano confirmed himself very fast, a sign that our performances are balanced in both classes.»

This Saturday, at night, Forza Racing will be involved in the last round of the Euro Series, a race that will mark the return of Gilles Stadsbader after school exams; the team will be back to complete for the next FIA Le Mans Karting race.