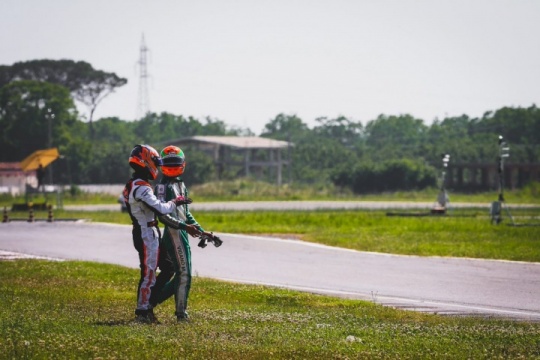 Author: Vroomkart International
Anthony Abbasse assumed his faults on the European debacle.
The Sarno European Championship will be a race that Antony Abbasse will not easily forget.

Arriving as standings leader after the victory of Wackersdorf, the French driver had already put a serious claim on the title before the Final.

But in Karting, as is well known, the champions are elected on Sunday, and - voilà - a contact in turn 1 saw the title slip from his hands.

On the accident that saw him involved together with his first adversary for the crown, Matteo Viganò, little to say; Abbasse, however, will long recriminate himself for not re-starting after the crash. As things turned out, in fact, just one point was enough to win the European championship, a point he would have easily obtained had he started off again.

«It’s time to take my responsibilities. Yesterday I lost the European KZ for 1 point and it's absolutely my fault. And about the collision: it was a race accident. It is clear that I should have to restart  to score at least 1 point. I feel terribly guilty, and above all for my team that did an extraordinary job. I'm sorry I only closed 3rd in the championship, but every failure is a lesson that makes you stronger».

And it is precisely with the post-race declarations that Abbasse proved to be a champion: in short, to start again or not after an accident?

This is a question that will always characterize karting competitions, a little less those of Anthony Abbasse who, with the elegance and humility that has always distinguished him, has shown he has learned his lesson.