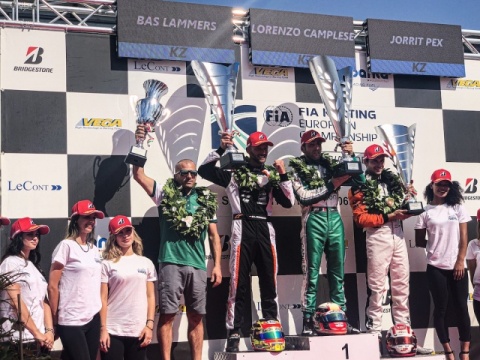 The final was won by Lorenzo Camplese (SC Performance) and Emilien Denner (CPB Sport). The day began with the final heats, which gave the two official Tony Karts of Simo Puhakka (KZ) and David Vidales (KZ2) the pole positions.

Pole positions that, as highlighted above, were not confirmed in the Finals. The two titles went to Jorrit Pex (KR) in KZ and to Emil Skaras (Energy) in KZ2.

To decide the fate of the race was the first lap which saw the crash between the two drivers competing for the stage success (and the title in the case of the first ), Alessandro Irlando (BIrel ART) and Puhakka. The two immediately left the scene, handing over the "keys" to Camplese's success.

Another accident, the one between Anthony Abbasse (Sodi) and Matteo Viganò (Tony Kart) instead conditioned the result of the championship; with the championship leaders out of contention it was all in the hands of Irlando.

The retirement of the latter, however, caused another change up front with Camplese who, taking the lead of the race, also took the chair in the European Championship.

On the finish line, however, to be the new European champion was Jorrit Pex, benefiting from the withdrawal of Marco Ardigò who, had he remained in the race, would have allowed his compatriot to also win the crown. Bas Lammers (Sodi) and Pex complete the podium.


KZ2 - Denner leads Sodi hat-trick, Skaras is champion
On the last weekend of the continental KZ2 season, Sodi Kart is fully satisfied with the hat-trick at race end. After the start, fire and flames for awarding the title with a David Vidales launched towards victory, followed by the much-expected rival and host, Giuseppe Palomba. Right from the start, the Spaniard from Tony Kart attempted an escape towards an absolute success that seemed almost pre-announced, then having to deal with the hard-fighting Palomba and Denner.

The latter two became the protagonists of the battle for second place, won by the French driver and lost by the Italian, from that moment onwards off the podium and out of contention for the Title. The war of nerves between Vidales and Denner, subsequently animated the entire duration of the race, further corroborated by outsiders Paolo Besancenez and Jean Nomblot. Despite the fratricidal war between the Sodi Karts, David Vidales failed to create a gap, the Spaniard himself then had to give up to the continuous attacks of a rambunctious Emilien Denner, first with the winning overtake outside curve 3.

The Frenchman subsequently imposed his pace, escaping towards the final victory, second place for Paolo Besancenez, third Jean Nomblot.
With the hopes of success canceled for Vidales, virtually European champion for most of the race, then ninth in the end, glory and continental title for Emil Skaras. The Swede thanks the triumph of Germany, administering a ninth place in Sarno that seemed to condemn him. Applause for Riccardo Longhi, still a protagonist and fourth at the end of the race, competitive but not enough to win the title, the same goes for Giuseppe Palomba, in all cases in contention the entire weekend; well Giacomo Pollini with the sixth place finish. Simone Cunati out of the race after a difficult Saturday, disqualified for technical non-compliance.
Academy - De Haan wins and is then disqualified, success for Partyshev
In the second round of the Academy, Robert De Haan had once again flattened the competition winning the race. The Dutchman then had to say goodbye to dreams of glory for the disqualification imposed at the end of the race due to technical discrepancies. Victory therefore for Oleksandr Partyshev, second place in the hands of Kajus Siknelis, third to homeboy Paolo Ferrari, author of a final all in attack mode.
From Sarno, Andrea Giustini and Simone Corradengo