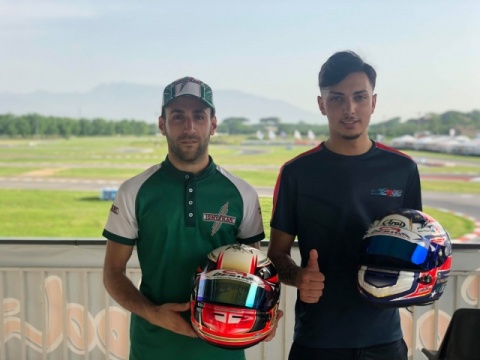 Author: Vroomkart International
KZ and KZ2 are an Italian business: Camplese and Palomba in pole position after qualifying practices. Ho still first in Academy.
Lorenzo Camplese (SC Performance) and Giuseppe Palomba (Croc Promotion) will start from pole position in the KZ and KZ2 heats of the second and final round of the FIA ​​Karting European Championship. Christian Ho on pole in the Academy.

The location of the International Circuit Napoli smiled at the Italians, who monopolized the pole positions at the European Championship.

KZ - Camplese aboard his Tony Kart / Vortex marked the best time in 56.279, breaking his compatriot Alessandro Irlando (Birel ART) by only 41 thousandths. 3rd Simo Puhakka (Tony Kart / Vortex), who had won the last race of the WSK Promotion circus in Sarno.

The 4th place, on the other hand, belongs to the leader of General Anthony Abbasse (Sodikart), followed by the Spaniard Pedro Hiltbrand (CRG) and Jorrit Pex (KR). 7th the other Kart Republic of Mirko Torsellini, who put Bas Lammers (Sodikart) behind him. Fabian Federer (SRP Racing) and Marco Ardigò (Tony Kart) finish the top 10.


KZ2 - Palomba leader in the home


Giuseppe Palomba is the last poleman of the European KZ2 season! Thanks to the best time of 56.418, the Campanian from Croc Promotion was able to impose himself on the competition as absolute pole man and group A. Behind the Italian, Giacomo Pollini for NGM Motorsport also returned to the high floors with the second best time in 56.640 , valid for the first box of group C. Completes the virtual podium with the excellent Senna Van Walstijn two tenths from first place but still leader of group C.

The last three pole positions assigned to Valentino Fritsch, David Vidales and Paavo Tonteri from group D to F. group Second row for a rediscovered Emilien Denner and Alessio Piccini, seconds for groups A and E. Weekend slightly uphill for the expected Longhi and Cunati, respectively 21st and 27th place overall, better than them does Skaras with the 13th time.

Singapore driver Christian Ho once again surprised everyone at the Academy Trophy title with the final pole position. Behind him are Jacob Douglas and Oleksandr Partyshev. Fourth place overall for the leader Robert De Haan.

The show of the FIA ​​European Championship will get underway tomorrow with the category heats for all three participating classes.