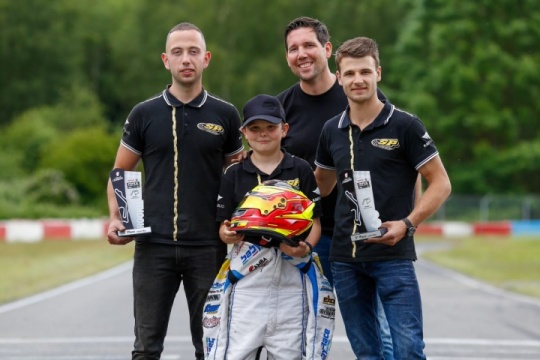 Press Release by: Tom Braeken
Tom Braeken took his first podium in Junior in Kerpen last week.
Despite it being only the second race in Junior, Tom Braeken went to the podium on the 3rd place in Kerpen for the third round of the Rotax Max Challenge Belgium.

The SP Motorsport team driver started the weekend with eighth place in qualifying, significantly increasing his pace between the Prefinal and Final.

In the Prefinal, in fact, Braeken took the 3rd place, which later became 2nd in the Final, less than half a second from the winner. The two results on the podium allowed him to take home 102 points, enough to earn the 3rd absolute position in the event with just 3 points behind the winner. In addition, Tom won  the price for best Rookie.


Despite being still only the beginning of his adventure in Junior, Braeken continues to strike the entourage for the rapidity in which he is adapting to the vehicle and to the different conditions that he is facing; this thanks to the excellent work done by Stan Pex and all the members of SP Motorsport, as well as help from sports coach Debby Hanssen.

Tom Braeken, SP Motorsport: «I'm very happy with this result. For me it's a great injection of confidence, especially because it came on a very physically and mentally trying track. My preparation will continue even during the summer which, due to the high temperatures, makes it possible to considerably increase one's prowess.»


The next race of Tom Braeken will be the fifth round of the Dutch Championship scheduled for June 23 in Kerpen.