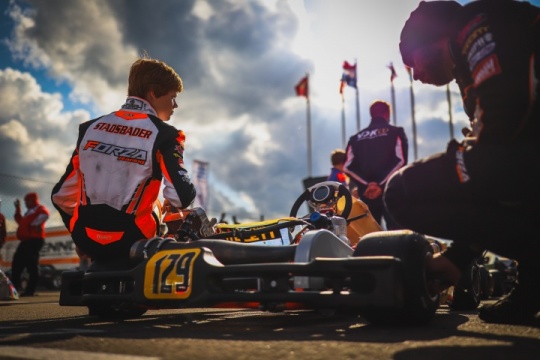 For the Belgian it was the first time racing on the Swedish track, after two days testing last month, and his weekend began by gracing the top 10 of the group, finishing 11th in the Qualifying Practices.

Starting from the 8th row in all the heats, Stadsbader was called to recover big. This, inevitably connected to a more than normal aggressive drive, caused two penalties for spoiler release that did not allow him to be part of the 34 drivers of the Final.

Gilles Stadsbader, Forza Racing (Exprit / TM): «It's a pity how the event ended as, after Genk, I was very confident that I could also enter the final in Kristianstad. Some too many contacts in the heats, however, caused two penalties for the spoiler and this kept me from qualifying for the final. After qualifying I knew I had to be aggressive, and I was; unfortunately it didn't pay off. We'll try again in Le Mans.»

Stadsbader will now take a few days off to recharge his batteries in view of the final WSK Euro Series final act scheduled in Adria.