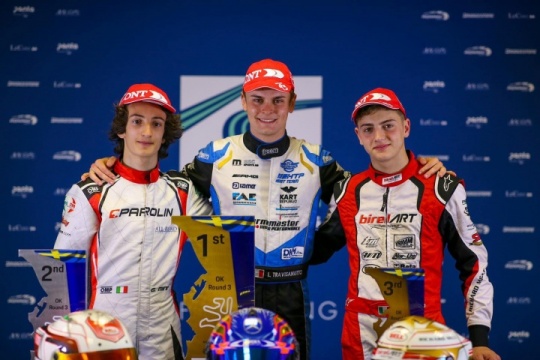 At the Åsum Ring both finals featured many surprises and, if as regards the European kart championship, it was the 5th victory in a row for Travisanutto, for Day it was the first success in a FIA Karting race.

OK - Lorenzo: Astounding!
"Manita" by Travisanutto (CV Performance), who brings home the 5th consecutive victory. At the start Dexter Patterson (Sauber Karting) maintained the lead of the race, only to have to give it up to a hardy Pedro Hiltbrand (CRG), able to put first Travisanutto behind him and then Patterson himself, who in the duel had the worst, slipping down to 8th. The leadership of Hiltbrand, however, lasted little since he suffered the return of the three Italians Travisanutto, Gabriele Minì (Parolin) and Luigi Coluccio (Birel ART). The three thus imposed their pace, and, while Hiltbrand lost positions, Patterson returned close to the podium. In the final, then, Minì seemed to be able to catch up to the leader, but the checkered flag put an end to his dreams of glory.


OKJ - Jamie Day, the big surprise
On the Kristianstad kart track, the OKJ European changes its cover face with yet another crazy race and the third winner in three stages. Already a protagonist on the Angerville podium, the promise of Lennox Racing, Jamie Day, was able to upset the plans of the frontrunners by imposing himself on the fierce competition. With a progression that began right from the start, Day managed to gain six positions to the fight for victory with rivals Bedrin and Amand. The Lennox Racing driver, taking advantage of the by now good experience and his great competitiveness, managed to get rid of the rivals already during the tenth lap. From that moment on, Jamie Day attempted an escape that seemed impossible by grinding fast laps to dig a furrow of a second over the competition. Jamie Day then crossed the finish line with his arms to the sky, and also reaching the foot of the general podium with 45 total lengths. Though not winning Marcus Amand celebrates, the true protagonist of this European with four positions gained and a second place that is worth gold and is above all the overtaking in the general over rival Ten Brinke, thus becoming the new absolute leader with 68 points, ten more than the Dutch driver. Closes a completely new man on the podium was the Lithuanian Kajus Siksnelis much to the joy of the Ward Racing team.Top five completed by the first of the Tony Karts, Nikita Bedrin, sometimes leader of the race, fifth Andrea Kimi Antonelli, first of the Italians and author of a more than positive weekend. Thomas Ten Brinke recovers nine positions but not enough to maintain his leadership, the Dutchman's seventh place forces him to hope for the final sprint at Le Mans where he will try to recover the ten points behind Amand. Zanfari surprises in the top ten with ten overtakes, while it was a disaster for Taponen from first to P12.

The next and last OK and OKJ European Championships races are scheduled for Le Mans for the weekend of 21 July.