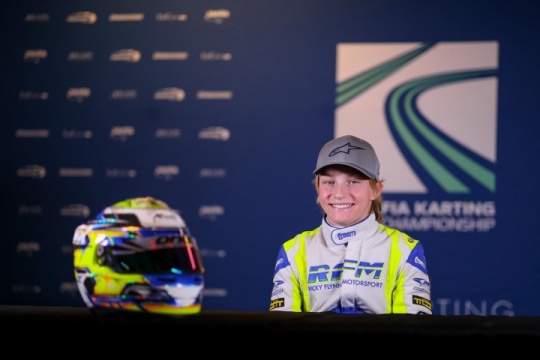 Author: Vroomkart International
Friday with uncertain weather conditions characterized the qualifications of the 2nd act of the FIA Karting European Championship on stage at Karting Genk: The Home of Champions.
he rain showers that punctually arrived when the time came for the drivers to enter the pre-grid created quite a few controversies among the mechanics. The core point? The possibility of accessing the pre-grid - as some in fact remained excluded - and the possibility of changing tires. The controversies about the interpretation of the regulation influenced - and not a little - the results of the qualifications, especially in OK.

To the abnormal situation in OK, where the 3 qualifying rounds were spoiled by numerous penalties, the polemen of the first two groups, namely Kas Haverkort (CRG) and Ayrton Fontecha (CRG), were the ones to pay the greatest price. Haverkort was disqualified from the session for bringing both chassis in pre-grid; to benefit was Alex Irlando (Birel ART), while Fontecha suffered the same fate, to the advantage of Morgan Porter (KR), for having gone beyond the track limits.

"Unharmed" was Luigi Coluccio (Birel ART), who in addition to the best time in the 3rd round also took the absolute pole position. The man who'd gone missing in Angerville Pedro Hiltbrand (CRG) is 3rd in qualifying group 3, in front of team mate Gabriel Bortoleto. Late, if you look at the pace shown in France, was Dexter Patterson (Sauber Karting), 4th in his turn.

Like him, also Lorenzo Travisanutto (CV Performance) and Gabriele Minì (Parolin / TM), respectively in P10 and P15 in the 3rd turn. Out, Finnish driver Juho Valtanen (Kothala), unable to take part in his turn at qualification for failing to comply with the pre-grid entry times.

The Junior qualifications experienced moments of uncertainty and apprehension, thanks above all to the sporadic rain which gave not a few worries to all the protagonists in their fight against the clock. Absolute pole position once again unexpected with Conrad Laursen (RFM) who displaced the competition with the best absolute chrono in 1'02''683. The Dane took full advantage of the track conditions in the first qualifying series, which were optimal compared to the remaining batteries.

Best performances also for Nikita Bedrin (Tony Kart) on pole for group B, Alfio Spina (KR) poleman of group C. Last three first positions in the hands of Maceo Capietto (KR) for group D, Marcus Amand (VDK) for group E and Alex Dunne (Tony Kart) for group F.  Far from pole was Thomas Ten Brinke (RFM), the man to beat here in Genk but not fast enough to go beyond the fifteenth final time; even worse fate for Tuuka Taponen, leader of the general, as far back as 63rd in the overall standings.

As already seen in Angerville, the OKJ weekend is set to once again experience a weekend that is almost completely new and unpredictable.

Appointment Saturday with all the category heats starting at 09.30, with weather conditions not forecasting rain but, on the contrary, appear to guarantee a dry track.