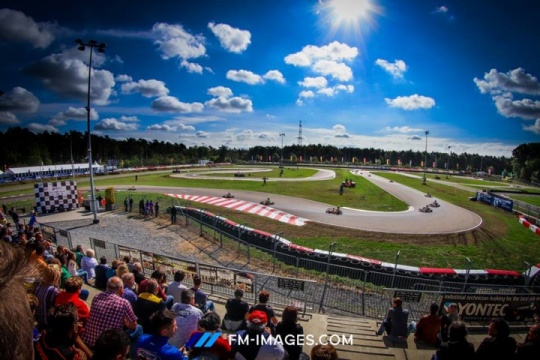 Author: Vroomkart International
The FIA OK / OKJ European Championship is back on in Genk (Belgium) after starting in France on the Angerville circuit.
The winding Genk kart track, scene of the last KZ World Championship, is ready to host the return of the direct-drive categories. The Belgian track, already elected as the past season's best event of the year, will try to make the FIA brand competition once again unforgettable, historically followed by the large local audience and more.

OK – Patterson, repeat performance?
After the crackling start in Angerville, Dexter Patterson will immediately try to impose himself in the second European round too, a success that could be worth making a serious claim on the title. The Scotsman will however have to defend himself from Valtanen, already at the top in the first round, and from Gabriel Minì, from whom much is expected this weekend. Among the other possible contenders are: Taylor Barnard, Dilano Vant’Hoff, Gabriel Bortoleto and World Champion Lorenzo Travisanutto, competitive in France and expected to fight for the podium. Not to be underestimated is also Alex Irlando, present in Genk in the last KZ season and therefore among the most expert of the track, alongside such home drivers as Pauwels, winner of the FIA 2018 Academy round, and Gilles Standsbader.


OKJ - Taponen to dominate again?
In Junior, the great unknown is once again called Tuukka Taponen. The Finn has amazed the circus with how he dominated in Angerville, triumphing and gaining the leadership of the European. The Finn is therefore called upon to repeat his performance against a Thomas Ten Brinke, for example, ready to oust him. The OKJ will also come alive via other drivers already in last weekend's spotlight, names such as: Jamie Day, Tymoteusz Kucharczyk, Ugo Ugochukwu and Martì Sobrepera. Among the possible outsiders, local boys Delbart and Lecertua will try to enter the top positions.

The weekend officially begins tomorrow, Friday 17 May, with free practice and qualifications, then moves on to the intense Saturday of the heats. The Grand Finale is scheduled for Sunday 19 May with the last heats and the finals of the categories.