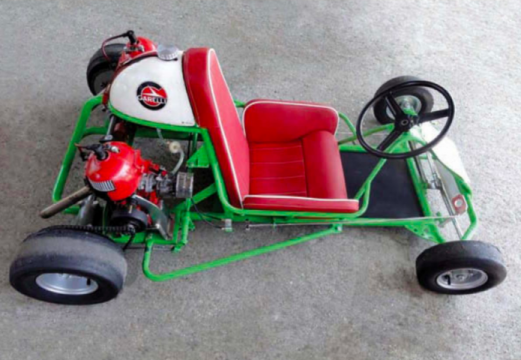 Author: Vroomkart International
The May 1961 edition of KARTs, the informative Italian karting magazine of that time featured a report on the Silvercar kart. The article was titled: New Model of Kart for the World Market.
It was evident that the Silvercar factory was intending to sell to a world market if the strapline was anything to go by. It looked like the American market had been a target the previous year for Silvercar because the 1960 models were known as Arizona, Louisiana (spelt Luisiana in the Silvercar advert) Florida and California.

Back then all of the Silvercar karts were powered by Garelli motors except the Arizona which used the Aspera AH 51 engine; Aspera being the name used in Europe to market the American engines known as Power Products.

It was said that Silvercar was a marketing ploy by Motori Garelli to sell their small industrial engine for karting use. The 1961 Silvercar adverts all listed their various senior models with the Garelli motor which had a displacement of 94 cc. The dual engine model was known as the Tempest and was equipped with a left-handed and a right-handed Garelli MG8 (Motori Garelli producing 8 HP). There was also a single engine chassis aimed at the 100 cc class called the Tornado. Silvercar also made a kart specifically for the junior market called the Mistral and used a 49 cc Garelli MG4 engine. The engines were not new having been on offer with the 1960 version of the Silvercar. However the major interesting development for 1961 concerned the rear axle in the kart.

Silvercar never won a World Karting Championship, however Italians Enrico Biesuzzi and his co-driver Riccardo Emiliani were victorious at the International Karting Grand Prix of Aden in January 1962 raced over 200 laps of a circuit 590 yards in length using Garelli engines.

Incidentally the address for Silvercar published in their advertisements was Corso Sempione 33 Milan. On the same street at number 48 was Trione Kart, a chassis that looked very similar to the Silvercar in that the seat sissy rails, the location and type of fuel tank, steering wheel and the front number panel were similar to the same Silvercar items. Today Corso Sempione is a street full of bars and restaurants and shows no signs of industrial manufacturing.


Alas with the advent of the sidewinder kart and the direct air-cooled engines early in 1964 both the Silvercar kart which was basically an engine behind the seat chassis and the fan cooled G.11 engine became history.