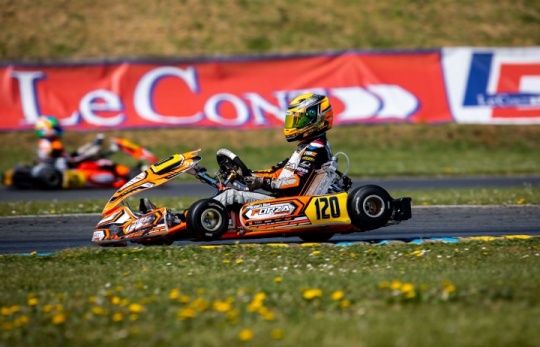 In the two weeks that separated France from the competition in Belgium, Jamie Croxford’s team have successfully run several test sessions to prepare for next month’s upcoming events.

The line up of the team at Genk: The Home of Champions:

Jamie Croxford, Team Principal: «This is a very challenging period for all the team members, whom I have to thank for their effort and dedication. In Angerville we were fast, but a bit of bad luck stopped us from making the most of our potential; why there’s a great desire for redemption. We will face the challenge in Genk aware of our having what it takes to do well.»
Qualifying Practice will take place on Friday 17th May between 16:30 and 17:55. The Qualifying Heats will occupy all day Saturday, 18th May between 9:30 and 18:20 before ending on Sunday, 19th May from 10:30 to 12:25. The OK-Junior Final will then start at 13:50 and the OK Final at 14:55.