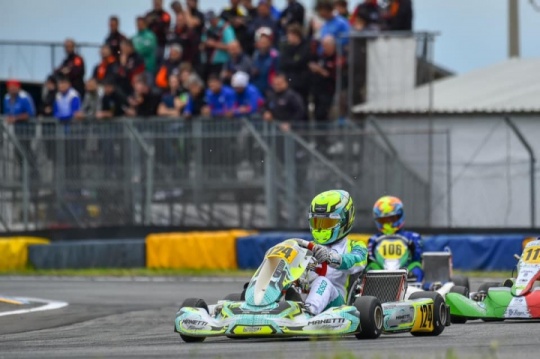 KZ2 - Bosco and Pizzi among the top names
The premier class weekend did not disappoint expectations with the many illustrious rivals and heartstopping battles.

Luca Bosco continued ascending his learning curve with a positive weekend that started with a good qualification in P11 overall and P4 for group B. Bosco then battled in the heats with an eighth place and an excellent P5 (with three positions gained), valid for the ninth spot on the starting grid in race 1. In the finals on Sunday, Bosco missed out on what he'd hoped for, finishing with a fourteenth and a twenty-first place (after the penalty), but once again demonstrating his excellent level of competitiveness among the big names.


Francesco Pizzi was also one of the protagonist of the first round, concluding the weekend of 7 Laghi in crescendo. The 19th place overall in qualifying and the two heats in P13 and P10 prompted the Italian to give his best during the first category final. With an excellent recovery of 9 positions, Pizzi in fact closed in eighth absolute position, securing pole position for final 2. In the second race, after taking pole position, Pizzi was unfortunately forced to retire thanks to a contact in the first turns. Nonetheless, given the pace shown, a positive weekend for Francesco Pizzi.

X30 Junior - Lola Lovinfosse and Gaia Bernasconi battle the whole weekend
The girls on the team embellished the X30 Junior even more, and were fiercer than ever. Lola Lovinfosse and Gaia Bernasconi completed a weekend that was not easy but constructive. For the French driver, a non-optimal qualifying with the 30th absolute time but, however, with a good recovery in the heats for a P12 and a P18, useful for access into the finals. In the first race, Lola Lovinfosse was forced to retire and then to start in the back for race 2. In the second race, Lola did a great job recovering as many as 11 positions, finishing in P22.

Same goes for Gaia Bernasconi, also not too lucky in qualifying with the 33rd time and even less in the heats with a 21st and a 25th place, due also to some technical problems. The Swiss driver however showed good potential, potential she is sure to put to good use in the next forthcoming races.

60 Mini - Wurz comeback, Varbitzalev growing
The 60 Mini concludes the race program by Manetti Motorsport with Oscar Wurz and Kaloyan Varbitzalev as protagonists.
The Austrian Wurz, already triumphant in the 7 Laghi trophy, saved an uphill weekend with 35th time and the three heats ending with a 20th, a 17th and a 12th place. Wurz fought for the additional heat of the repechage, managing to close in third place and securing access to the finals. In the first race, Wurz gained nine positions, closing 21st, second recovery in the second race with the 20th final place.
Less fortunate was Varbitzalev with the 45th time and the three heats closed with three placings over the 20th place, also due to some problems.