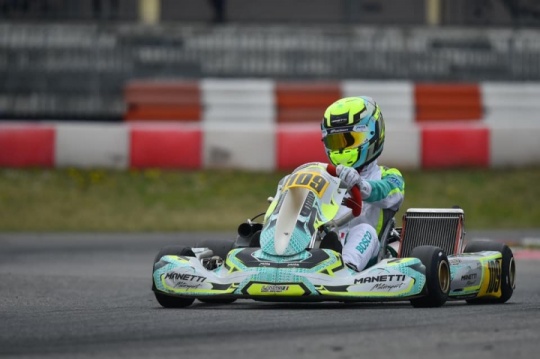 The substantial line up is ready to have their say in the first of five events of the season.

KZ2
Luca Bosco and Francesco Pizzi are back on track after their first efforts of the year in trophies and the WSK season. Luca Bosco is ready to put into practice the good things he's achieved to this moment, growing race after race in the premier class. Bosco will immediately try to find the pace on the tortuous track of Castelletto di Branduzzo, aiming for entry into the Final and the fight for the leading positions in the category.


Francesco Pizzi, back from a few not-so-lucky performances, will start instead with the intent to redeem himself and take home a good, maybe great, weekend with useful points for the KZ2 general classification.

X30 Junior
In the Iame 2019 trophy, the all-female pair of Gaia Bernasconi and Lola Lovinfosse will be among the weekend's much-awaited competitors. The French driver recently archived the double weekend in Angerville between the European FIA and the WSK Euro Series, important towards the preparation for the ACI event. Lola is called upon to start from the good performances already demonstrated previously, as is Gaia Bernasconi. The Swiss driver, unlucky but competitive in the Margutti Trophy, returns to Castelletto after the test of the Swiss Championship that had seen her among the category's protagonists, a good foundation from which to start.

60 Mini
More than ever fierce, the 60 Mini is ready to put on a great show with so many drivers competing, including Kaloyan Varbitzaliev and Oscar Wurz. For Varbitzaliev, the appointment with the ACI appears to be a chance to redeem himself after a first study approach, fundamental towards growing in a complicated category like the Mini. Great expectations for Oscar Wurz, already winner in Castelletto during the 7 Laghi Trophy weekend. The Austrian will try to impose himself again on the Italian track, now without secrets for him.

Race weekend starts Friday, May 10th, with the official qualifications and free practice, scheduled for Saturday. Grand finale on Sunday 12 with double races for each category.