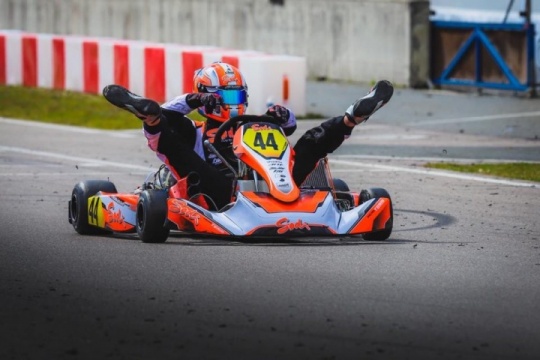 Author: Vroomkart International
On the curves of Wackersdorf (G) the curtain closes on the first round of the European KZ / KZ2 Championship and the first FIA Academy Trophy appointment.
KZ – Abbasse alone at the finish line
The finals of the day closed the European event in style with the long-awaited match, albeit with different protagonists. After a more than positive Saturday, Anthony Abbasse (Sodi) made most of his starting position even in the final. The Frenchman started very strong, leaving the competition behind from the start to the end of the race. The unsustainable pace of Abbasse created a final gap of more than two seconds, useful to close the finish line up front and alone. In second place, Italy returned to the top of the class with Matteo Viganò (Tony Kart) and Alex Irlando (Birel Art) in second and third positions. For Viganò, a weekend at the head of the class for the team's colors comes to an end, with Saturday's pole position and good finishes in the heats, the same goes for Irlando, best of the Birels and competitive on the track that had seen him win at two years ago in the KZ2 Super Cup. Closing the top ten, Bas Lammers (Sodi) with the excellent recovery of five positions, only fifth the poleman Jorrit Pex (KR), never at the forefront of the race. Top ten for Marco Ardigò (Tony Kart) and Simo Puhakka (Tony Kart) in sixth and seventh place, super recovery for Federer (Maranello) from 22nd to ninth. No smiles at CRG's with De Conto's 13th place and Hiltbrand's 16th after a penalty of 10 seconds due to incorrect maneuvering. Out also Celenta (Prague).

KZ2 - The final at the photofinish awards Skaras
The last act of the KZ2 confirmed once again the most entertaining moment of the day. The brawl for the victory in fact animated all the German public with surprises and plot twists within the space of a second. Emil Skaras (Energy) takes up the good performance of 2018, bringing home the first European success. The Swede was good at starting at his best, leaving a good Alexander Schmitz (Renda Motorsport) in place. Skaras tried to run off several times during the race, but was unable to escape to any extent. At the end of the race, the Energy driver was in fact caught up again and almost overtaken by Simone Cunati (CRG Modena) and Riccardo Longhi (Birel Art), who arrived behind him. The two Italians gave proof of being able to compete for success, both Cunati and Longhi had shown right away that they could already be there with the excellent qualifying on Friday. Simone Cunati then maximized the results of the category heats, obtaining the second starting row, then transformed into a silver medal. A different weekend for Longhi, who was fast but just as unlucky in the heats that had condemned him to start out of the top 10. He unleashed an unsustainable pace and managed to recover ten positions by the end of the race. The top five ends with the first of the Tony Karts, David Vidales, in fourth place, followed by Paolo Besancenez with six positions gained. Good race also for the Italian Champion Giacomo Pollini, sixth at the finish line with nine positions gained, eighth Giuseppe Palomba, tenth Alessio Piccini.

Academy Trophy - De Haan, what a show!
The FIA Academy seems to have found a new protagonist in Robert De Haan. The young Dutchman literally dominated the weekend, also replicating in the final with a perfect race from start to finish. De Haan finished with over four seconds ahead of Joshua Coertze (ZAF) and Magnus Germansen (DEN), respectively in second and third position. Top five for Gael Julien (IND) and Charlie Wurz (AUT), seventh Paolo Ferrari (ITA).