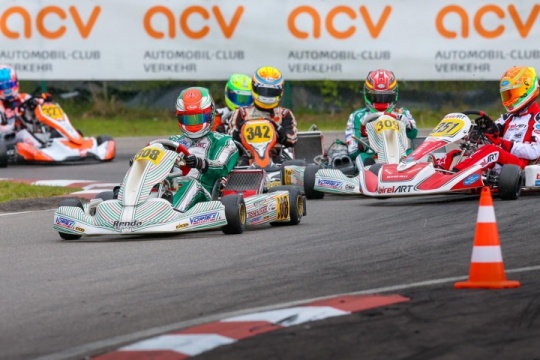 Author: Vroomkart International
Abbasse (KZ), Schmitz (KZ2) e De Haan (Academy) are the provisional leaders after the heats of Saturday of the FIA Karting European Championship in Wackersdorf (Germany).
A rainy Wackersdorf was the stage for the heats of the FIA ​​Karting European Championship round 1 for the KZ and KZ2 classes, and the Academy Trophy.

The most "profitable" were Anthony Abbasse (Sodi / TM) in KZ, Alexander Schmitz (Tony Kart / Vortex) in KZ2 and Robert De Haan (Exprit) in the Academy.

KZ - In the two heats of today, the French Abbasse took a victory and a second place; a victory, and a third for Jorrit Pex (KR / TM). 3rd the poleman Matteo Viganò (Tony Kart / Vortex) with a 6th and a 3rd place. The top 5 is completed by Alex Irlando (Birel ART / TM) and Lorenzo Camplese (Tony Kart / Vortex).