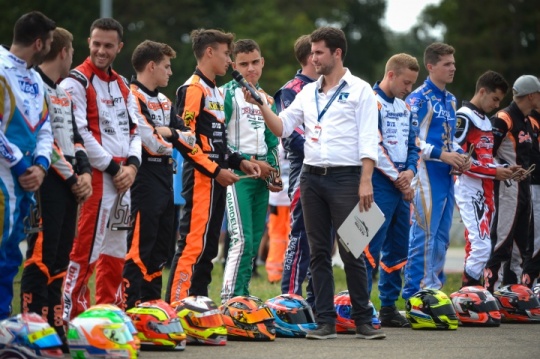 Author: Vroomkart International
After the first appointment with the FIA OK and OKJ European Championships, the gearbox classes and the FIA Academy are also about to raise the curtains on the continental season.
On the Wackersdorf track (Germany), the protagonists of KZ, KZ2 and FIA Academy Trophy are ready to get on track to do battle in the calendar's first round.

KZ - Sodi vs Tony Kart?
Given the recent appointments with the premier class, what is expected for the first FIA-branded weekend is yet another chapter in the challenge at the top that, at least for now, looks like a Sodi Kart - Tony Kart duet.
Bas Lammers and Adrien Renaudin will immediately try to impose their own pace, already demonstrated in the WSK appointments. The Dutch driver has the victory of the Super Master Series on his shelf and the desire to return to the highest ranks, while his colleague Renaudin will try instead to repeat last year's success in KZ2.

Besides the French team, the others will certainly not just sit by and watch; there are great expectations for the Tony Kart squadron with Marco Ardigò, Simo Puhakka and Matteo Viganò. The trident of Prevalle has shown good pace in the pre-season, hence the expectations for beginning of this new European challenge.
The expectations are also growing for Paolo De Conto, last year just a step from yet another title with CRG; same for Pedro Hiltbrand, called to make his mark. Equally expected are the possible luxury outsiders like Kremers and Irlando (Birel Art), Dreezen (KR), Celenta (Prague), Pex (KR), Abbasse (Sodi) and Iglesias (Formula K).

KZ2 - Italians ready for the vendetta
After last year's all-French challenge, KZ2 is about to experience yet another season of close fighting and uncertainty that will keep fans thrilled to the end. Orphan of Renaudin and Viganò, the twin class of the KZ is sure to find new hot names among the 2019 entry list.

After the second place of last season, eyes on NGM Motorsport and the Italian Champion Giacomo Pollini, ready to follow up on the good things done up to now. Pollini will not be the only Italian to fight for the crown; great expectations also for Riccardo Longhi (Birel Art), former protagonist of 2018, and Alessio Piccini (Tony Kart). The Italian drivers, alongside Marco Valenti and Filippo Berto for CRG, will presumably be fighting among the young promises of the category, David Vidales (Tony Kart) and especially Emilien Denner (CPB). The Frenchman, already a winner this season, is the category's one-to-watch, thanks also to the seat inherited from the defending champion Renaudin.

Among the many possible surprises, watch out especially for German hosts like Maximilian Paul for DR and Alexander Schmitz (Renda Motorsport).

FIA Academy Trophy - Everyone on the track!
The FIA and OTK brand trophy is ready to write yet another page in its history. After the victory of Mari Boya (Spain) last season, new protagonists and new nationalities will take part in the event. Among the favorites, without a doubt, stand out some of the protagonists of the FIA OKJ season such as Doods (GBR), De Haan (OLA), Ho (SIN) and Delbart (FRA) among others. As possible outsiders, Ferrari (ITA), Wurz (AUT) and Rauer (GER).

The battle will start tomorrow with the first qualifying of the season; appointment with the heats on Saturday 4, grand finale on Sunday, 5 May.