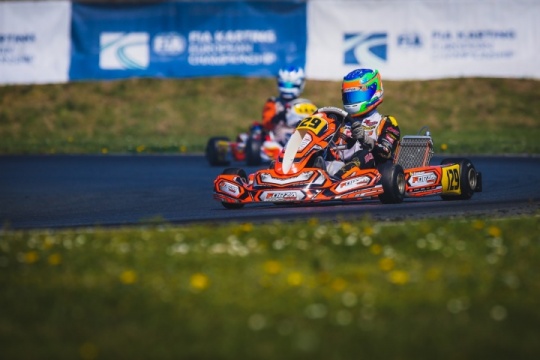 In Angerville, where Stadsbader marked his OK debut in CIK FIA competitions, the youngster started his weekend in the group's P18 in the Qualifying Practices.  Starting with clear intent of a comeback in the heats, an accident and a technical problem in the first two races relegated him to 21st and 17th positions respectively.

In the 3rd heat of Saturday, Stadsbader finished in 17th place while in the 4th he finished in top 10, in 9th position, after setting the fastest lap of the race and having gained as many as 9 positions. Another brilliant manche on Sunday, filed away in P13, did not unfortunately allow him to complete his fine work and gain access to the Final.

Gilles Stadsbader - (Exprit / TM): «It was a bitter weekend in terms of results, but I still learned a lot. I regret not being able to qualify for the Final. It would have been a nice way to repay my efforts and those of the team, but the races are like that. Now it's time to focus on the 2nd round, which will be staged in Genk on my home track.»

Genk, home of the second round of the FIA Karting European Championship, will be a great opportunity for the Forza Racing driver to prove his mettle, having already won the BNL Kick-Off on that track this year.