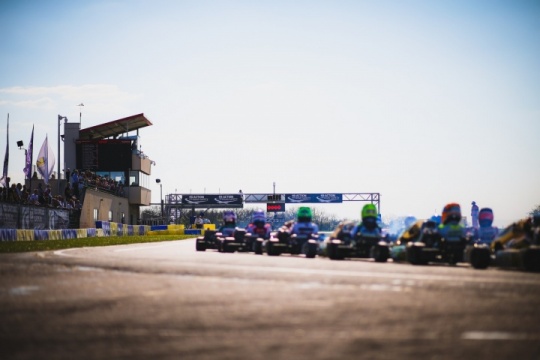 Author: Vroomkart International
Tuukka Taponen (Kohtala) and Dexter Patterson (Sauber) won the first round of the FIA Karting European Championship in Angerville.
Although at the height of two totally different races, both drivers won by confirming the results of the heats, at the end of which the winners were those with fewer penalty points.

Given the twists and turns of the first two days of the race, a much more difficult final was expected. A struggle that, to tell the truth, was seen only in the rear of the field and only in the early stages. In front, in fact, the first three positions remained unchanged with respect to the start, despite Gabriele Minì (Parolin), 3rd at the finish line, trying several times to overtake Juho Valtanen (Kohtala), 2nd, without succeeding in his intent despite being on his tail ie rear bumper in the last 2 laps.


4th place went to Taylor Barnard (Rosberg), able to overtake a Dilano van T'Hoff (Forza Racing), who in the early laps appeared to be slightly less en forme than in the race finale where he became more threatening, to the Brit's disadvantage. As many as 3 drivers in the top 5 come from OKJ, a sign of the excellent level of last year's cadet class.

A good comeback allowed Lorenzo Travisanutto (CV Performance) to access the top10 after starting 11th. Travisanutto rises, Pedro Hiltbrand (CRG) descends. The Spaniard, who had set the fastest time in qualifying on Friday, failed to confirm the pace held during the heats.


OKJ - Taponen, what a show

The first weekend of the FIA Karting European Championship 2019 ends here. The Junior confirms to be fierce and worthy heir to the 2018 edition.

On the Angerville circuit, Tuukka Taponen dominates the weekend, concluding with the stage success. After a Saturday as absolute protagonist with heats won in succession, the Finn of Kohtala Motorsport is flawless in the the weekend's last act, making the most of the starting pole position. Taponen literally dominated the race by imposing a hellish pace for the competition.

First from start to finish, he then crossed the finish line with his fist to the sky and the winner's trophy at the ready. On the second step of the podium, Thomas Ten Brinke confirmed himself as the protagonist of the series with four positions recovered with respect to the start at the end of the exciting battle for the podium with companion Laursen.

Third place and applause for Jamie Day thanks to the eight positions gained to the checkered flag. Top five for Josep Maria Sobrepera, fourth for the colors of Tony Kart, fifth Ugo Ugochukwu, protagonist of the first positions in the initial stages of the race. The Russian Nikita Bedrin also had a very positive final, second with 12 overtakes at the top, the best of the top ten; also of note the race of Kucharczyk, second for half the race; ten positions gained for Soldavon in tenth place.

Retirement for Conrad Laursen, protagonist of the battle for the first positions until a few laps from the end; Enzo Trulli also out, able to gain positions but unlucky for the epilogue.

Next appointment at the weekend of May 19th with the second round of the FIA European Championship in Genk (BEL).