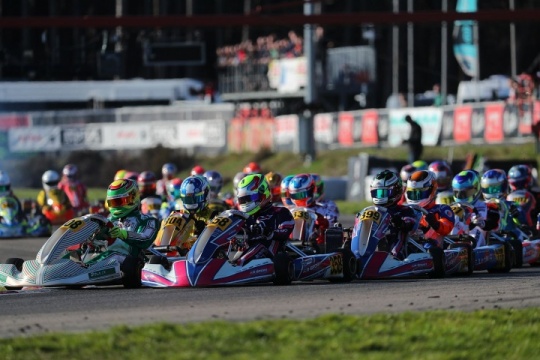 The event, presented "Open", did not score any points for the final classification of the championship; however, the winners of the Junior MAX, Senior MAX and DD2 classes won a "ticket" for the Rotax MAX Challenge Grand Finals of Sarno and the DD2 Masters’ was awarded with a free slot for the Euro Trophy.

In Junior MAX the winner was Mike van Vugt (JJ Racing), while in Senior MAX and DD2 the wins went to Ilian Bruynseeles (Bouvin) and Niklas Graenz (42 Competition).

In both races of the Senior a fiefdom for Ilian Bruynseeles (Bouvin), Mathilda Olsson (Strawberry) and Bradley Barrett (Dan Holland), who will debut in DEKM. Few  had doubts about the absolute victory, which went to Bruynseeles.

In DD2 both Finals were won by Niklas Graenz (42nd Competition), who in Race 1 preceded Daniel Machacek (Daems) and Xen De Ruwe (SSC) while in Race 2, over Machacek, 2nd, the Finn Ville Villaeinen. In this way, the third and last ticket available have been secured.

The first three drivers "invited" to the 20th edition of the Grand Finals are therefore van Vugt, Bruynseeles and Graenz.

The next round of the Rotax MAX Challenge Euro Trophy is scheduled at the Adria Karting Raceway on the weekend of June 2nd.