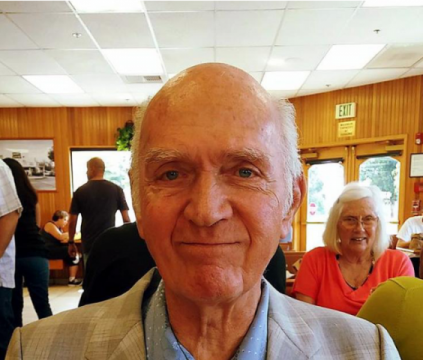 Author: Vroomkart International
Walter Allan Meyers, Master Mechanic, died of natural causes on 26 March 2019 aged 84. He was born 31 December 1934 in Cleveland Ohio.
While serving in the Army at Fort Lewis, Washington, Walt got interested in engines and was constantly trying to increase the performance of his Armoured Personnel Carrier.

In his 1980 book, 'So You Wanna Go Fast', he described himself as an engine nut. "I have to work on engines. I'd go batty if I couldn't tinker with them and try to figure out how to make them faster." As you have likely already guessed, Walt had the fastest Armoured Personnel Carrier in the U.S. Army.

Before the Army, Walt worked in construction as a carpenter and also as a repo man when that work was available. After the Army, Walt fell back into the same line of work. However, he soon found a fledgling kart racing circuit developing near him. The engine nut in him couldn't stay away. Within a few years he was the 1967 International Karting Federation (IKF) National Champion. People flocked to him to have their kart engines prepared for competition which resulting in the opening of the Meyers Speed Shop, which later became Meyers Racing Engines.

Walt would talk for hours on the phone with NASCAR greats Al Unser and Bobby Unser about how to go faster. This type of collaboration helped many of his customers to win race after race. His son John was the 1975 and 1976 IKF Grand National Champion and 1978 and 1985 IKF National Champion.

The engine tuner for the IKF Senior Grand National Champion each year was awarded the Master Mechanic Award and Walt won this multiple times. Actually the IKF discontinued the practice after Walt won it too many times.

Throughout Walt’s life he would invent his own math in order to solve problems that others thought were impossible. When the Israeli Defence Force was looking for a small engine for a reconnaissance drone everyone said it could not be done to their specifications. Walt asked them a question they had not been asked before. "How long does it need to last?" He created a single use engine without coolant for the Israelis that met their specifications.

Walt designed Amago Raceway and the kart track at Perris Auto Speedway, California. He went all-in on the financing of Amago Raceway. He had a trusting nature and placed a high value on handshake agreements.

Walt invented and patented a tyre ring that improved kart tire performance and longevity by stiffening the tyre sidewall. He also developed many of the safety components and rules for IKF and was for a long time an active member of the IKF Board of Directors. Wally was an inventor, track designer, mechanic and writer.

Some of Walt’s inventions were the billet engine block, Bug Stinger sidewinder kart, Lancer kart, co-designer of the Proline K1 kart with Doug Henline and John Meyers, as well as the Quick Clutch Puller. He also produced the first neck collar for protecting the collar bone. Away from karting he was responsible for the open once automatic locking mailbox.

Walt Myers was a good-natured congenial guy who had a real talent for putting together a winning kart racing machine.

A memorial service for Walt Myers will be held in San Diego on the 27 April 2019.