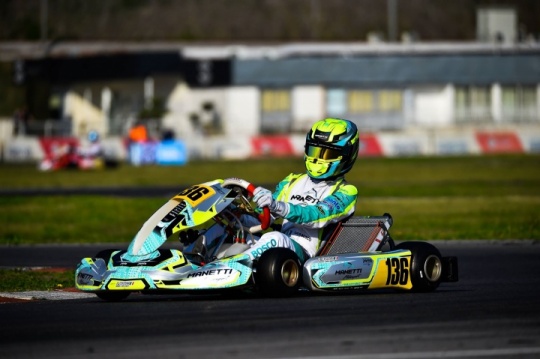 Author: Vroomkart International
Manetti Motorsport continues to grow, back in Sarno again for the first WSK Euro Series round.
After the weekend just ended with the epilogue of the Super Master Series, the team is due for an encore at the Sarno track again this weekend. The European WSK brand competition returns to the season's calendar, involving all the drivers in the paddock.

KZ2 - Bosco and Pizzi set for improvement
In the premier class, this second close date on the track that will host the epilogue of the next FIA European Championship in June. An important double test, useful for data collection and for future developments. Luca Bosco and Francesco Pizzi will once again be at the starting blocks of the gearbox class, ready to improve on what they did last week. Back from his excellent access to the final, Bosco will try to climb other positions and put together as much experience as possible for the FIA races. For Pizzi, the objective is to qualify for the final on what he considers his home circuit.

Luca Bosco: «My objective is to improve every race. Last week, we showed that we had good speed (we were third in Saturday's warmup) and also in the race. Running with the grown-ups, let's say it's a good challenge; there are so many KZ1s. The experience is very important in this category but slowly I will also arrive. In front, there are World Champions; for me, they are great examples. Again, I thank the engine support of Tony kart - Vortex and Alessandro Manetti».

Francesco Pizzi: «Sarno is like my home track because it is the closest to my home. With the KZ, it's beautiful; here we reach the highest speed. In the last race of the Super Master Series, we had problems with the engine, but the team worked hard and this weekend we can demonstrate our potential. We hope to finish in a good position and among the first KZ2s».

OKJ - New chance for Wurz and Lovinfosse
Among the young drivers of Junior, Lola Lovinfosse and Charlie Wurz are ready to defend the team's colors. The French girl, back from a not easy weekend, will have to make the most of her experience of the Super Master Series. Charlie Wurz will make his debut on the track in Campania, now unknown to him.

Lola Lovinfosse: «That last week was a very unlucky weekend. In the first race, the engine broke. In the second one, I lost the chain and it was very difficult for me, as I took so many penalties and I didn't qualify … This is my first international year. My objective of the beginning of the season is to be able to qualify; for mid-season, it will be to be in the top 15 and, obviously, to finish the year in top ten! »

Charlie Wurz: «It's the first time for me on this legendary track and I'm delighted to run my first laps. For my fourth race in WSK, I have to be realistic but I'll give my best as always».

Appointment to today (Friday 29) with official qualifications and the first qualifying heats. The Euro Series program is then set for Saturday with an intense day of direct confrontations, while the grand final is due on Sunday 31 with pre-finals and finals.