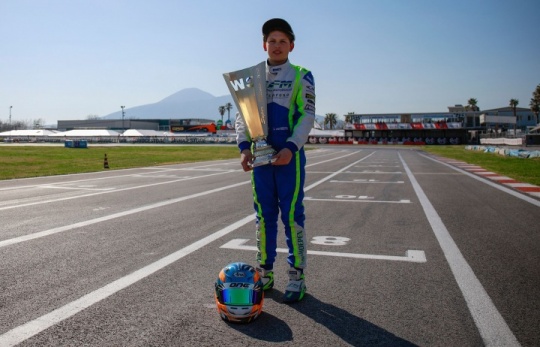 Press Release by: Laurens Van Hoepen
2nd position and good pace for Laurens van Hoepen at the WSK Super Master Series last round placed in Sarno.
A positive weekend for Laurens van Hoepen in Sarno at the WSK Super Master Series, where he finished in 2nd position.  At the Circuito Internazionale di Napoli, the Dutch driver made himself the protagonist of a very solid performance.

After scoring the best time in his qualifying group, in fact, he was the best at the peak of the heats as well as the winner of the Prefinal A.  In the Final, after a 3-man fight, van Hoepen finished in 2nd position, proving to have a great pace throughout the weekend, consistently among the fastest in every battle. This performance also earned him 5th place in the championship.

With these assumptions the young man prepares for the WSK Euro Series and, above all, for the FIA Karting European Championship, the latter among the most important objectives of his second and last season in OKJ.

Laurens van Hopen: «I'm sorry not to have crowned the weekend with the victory in the Final, but when you fight with other drivers, that's the way things are, the variables are endless. The important thing, however, is having shown that we have the pace to be up front; we were among the fastest throughout the weekend and this bodes well for the upcoming events. I want to thank the team Ricky Flynn, my mechanic Jack and One Engines for the excellent material made available to me.»

The 2019 season of Laurens van Hoepen continues this weekend always on the Circuito Internazionale di Napoli on the occasion of the first act of the WSK Euro Series.