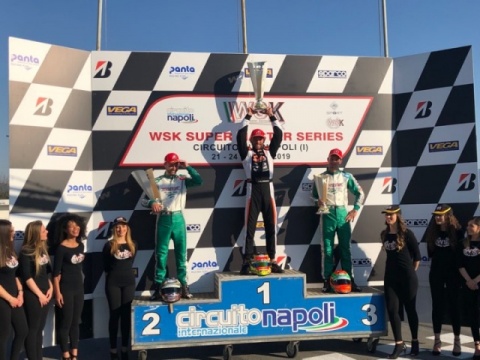 OK - Starting from pole position, Patterson kept the race lead during all 17 laps, followed by brand mate (but at Rosberg Racing) Taylor Barnard (KR / Iame), who in the final also gave the impression of being able to attack his British rival, but without success. 3rd place went to a solid Gabriel Bortoleto (CRG / Iame), who from the 5th spot on the starting grid made his way to the lowest step of the podium. The top five ended with Juho Valtanen (Kosmic / Iame) and Dino Beganovic (Tony Kart / Vortex).

KZ2 - When the red lights went out, poleman Marco Ardigò (Tony Kart / Vortex) kept the lead of the race, despite a threatening Lammers. The latter then made the decisive pass during the 3rd lap; from that moment on, he kept the lead to the checkered flag. Ardigò confirmed P2 in front of team mate Matteo Viganò (Tony Kart / Vortex). 4th was Adrien Renaudin on Sodi / TM, while a good comeback allowed Simo Puhakka to close 5th and bring to 3 the official Tony Karts in the first 5 places.


60 Mini - The last act of the youngest drivers was full of thrills and surprises. Rashid Al Dhaheri (Parolin / TM) was able to get back on track after a Super Master Series seemed almost to slip from his grasp. After the lightning start, the UAE driver quickly took the lead until the end of the race. Heart-pounding victory for the new WSK Super Master Series Champion, ahead of rival Maciej Gladysz (Parolin / TM) by a gap of only + 0.212sec. Third place for the first of the Italians, Andrea Filaferro (Tony Kart / TM), author of 11 total overtakes compared to his starting position. Maksim Orlov (Parolin / TM) and Maksimilian Popov (Parolin / TM) close the top five. Only sixth was Alex Powell (Energy / TM), second in the general standings, bronze medal for Ean Eyckmans (Parolin / TM), thirteenth at the end of the race.


OKJ - Many different names during the Junior weekend but only one final winner. Russian-born Ward Racing Artem Severiukhin (Tony Kart / Vortex) completes a perfect weekend with the victory of the pre-final and the absolute domination of the category finals. Starting from pole postion, Severiukhin left nothing to his opponents, the show for fans taking place behind him. Three-way fight for the final podium with Jamie Day (Exprit / Vortex), Laurens Van Hoepen (FA / Vortex) and William Siverholm (Tony Kart / Vortex). The Briton crossed the finish line in second place, mathematically taking him to the top of the general classification, only to have to say goodbye to the title because of the 5-second penalty for the front spoiler. Second place therefore in the hands of Van Hoepen, followed by Swede Siverholm. Top five completed by James Wharton (FA / Vortex) and Marcus Amand (KR / Iame). Andrea Kimi Antonelli takes the Champion's trophy home, despite the pointless weekend.

Appointment to next weekend with the return of the WSK Euro Series to Sarno.