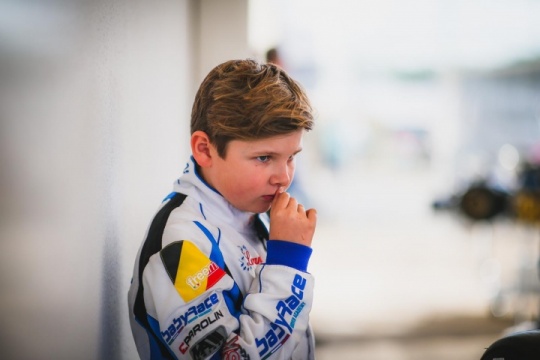 Braeken, after a not easy weekend at the World Circuit La Conca, is ready for a comeback on the famous Neapolitan track supported as always by the Baby Race team and by coach Marco Belogi.
The trip to Naples is an important moment for the Belgian's season which, after a seasonal start characterized by cold temperatures, is preparing to face the spring and summer period, a crucial moment of a karting season.
Tom Braeken: «I used this little break to recharge my batteries for Sarno's double trip, which represents an exciting challenge. It is one of the most famous circuits in Italy and fastest in the world, it is electrifying to get on track here at the Circuito Internazionale di Napoli. I am 100% motivated to bring home a good result.»

The event will start on Thursday 21st with Free Practice, which will leave space, on Friday, for Qualifying Practices and the first Heats, which will be concluded on Saturday. Lastly, Prefinals and Finals will take place on Sunday.