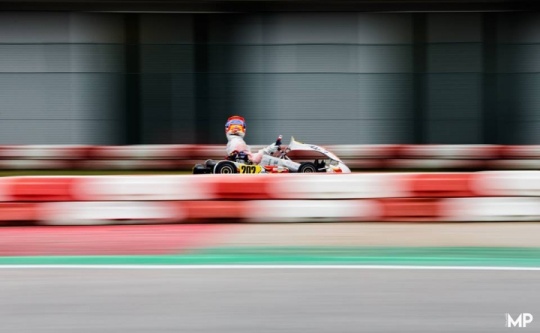 Author: Vroomkart International
The 2019 Super Master Series reaches its final act before the end. On the Naples International Circuit (Sarno), all the categories will compete for the awarding of titles.
60 Mini - Eyckmans ready for triumph
After the recent La Conca race, the ranks of the 60 Mini are re-shuffled with Belgian Ean Eyckmans leading the standings. A more than positive weekend for the young driver who, despite missing out on the win, managed to overtake Rashid Al Dhaheri, now in second place. Alex Powell, third contender, and fresh winner of the Apulian race, is ready for the final turnaround that would guarantee success. Irfan and Macintyre close the top five.
The complete ranking

OKJ - Antonelli looks for an encore
Andrea Kimi Antonelli again manages his advantage in the OKJ general classification, thanks also to the splendid success of Muro Leccese. The Rosberg Racing driver continues his path of growth with noteworthy performances, stimulating also for the next FIA events. Antonelli leads with 215 total points, without taking his eyes off Thomas Ten Brinke, direct rival for the final victory. The Dutchman has shown great competitiveness throighout the season and managed to re-emerge on the last weekend, confirming again his second position. In third place and on equal points, Nikita Bedrin warms up the engines for the decisive appointment, useful to confirm himself in the top three of the category. Arvid Lindblad and Jamie Day complete the top five, nominating themselves as valid outsiders for the current season.
The complete ranking

OK - Patterson-Travisanutto: here we are!
Only thirty-eight points apart, Dexter Patterson and Lorenzo Travisanutto promise battle in the final round of the Super Master Series. The World Champion will have to return to the top spots as in the first races of the season, attempting to overtake the Scottish rival, very much en forme in the new category. 239 points for Patterson, 201 for Travisanutto: the FIA ​​season's tasting has already begun.
Challenge for the podium between Taylor Barnard and Gabriele Minì divided by ten points at the end of the weekend in Puglia, won by the Sicilian. Behind the two "badboy rookies", Dino Beganovic closes the top five.
The complete ranking

KZ2 - European Championship Tests
After the round at Lonato, the premier class returns to the track for the decisive race, useful as a test for the second round of the FIA ​​European Championship. Sodikart is hoping for a 1-2 with a Bas Lammers fleeing for success after the great inaugural race, behind him the European Champion KZ2 2018, Adrien Renaudin, chasing with only two points behind. Third place for Marjn Kremers, fourth and fifth place for Paolo De Conto and Alex Irlando.

Appointment at the weekend with free practice and qualifications on Friday 22nd, races scheduled for Saturday 23rd, the final Sunday 24th March.