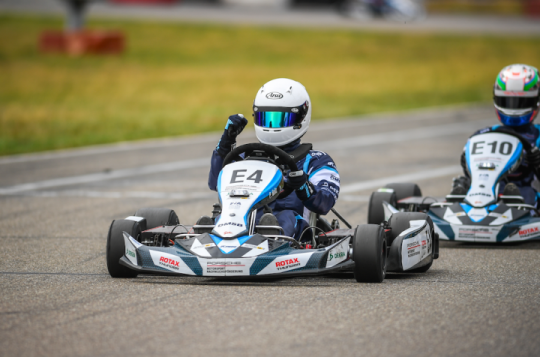 Author: Vroomkart International
Discovering the 2018 DEKM champion, Philipp Britz.
It was history in the making when Phil Britz crossed the line at the deciding round of the 2018 German Electric Kart Championship at Karting Genk in Belgium last August, securing the victory to become the first person to win the Porsche Motorsport-supported eKart series.

The 16 year old from Saarbruecken in Saarland, West Germany initially considered the DEKM for a new racing challenge, having made the switch from motocross to karting some time before.

“At the end of 2017, I saw an article about this new DEKM championship and wanted to do something different, so it was a perfect new challenge when all drivers have the same karts.”

Of course, with the introduction of a completely alternate way of karting and the unknown of what was to be expected with electric powered technology in racing today, it was going to involve making the transition to a totally different type of race package and style of driving.

“The series had some ups and downs, but overall it was a great year. I think what enabled me to become the champion is that I could adapt quite fast to the new kart.”

When asked about the concept of the series and the organisation, Phil believes it was excellent.  Not only was it about a revolutionary eKart racing series that would give German drivers more future Motorsport opportunities, but it also brought all the drivers together in many ways.

“The DEKM as an ‘Arrive & Drive’ series is perfect! I really have to say that the organisation was great; we always had catering with nice food for lunch and the awnings were always clean, so it’s perfect for anyone who wants this kind of service. I don’t think it can get any better.”

And the best part about the DEKM?

“The coolest event for me was competing at the Rotax Grand Finals in Brazil. With all the drivers staying in the same hotel, we all had a lot of fun together".

“The DEKM gave me the chance to have contact with Porsche Motorsport and the Night of Champions gala presentation was also a cool event. I was interviewed and then had the opportunity to talk with some of their legendary official drivers – like Mark Webber and Timo Bernhard.”

Phil has a busy schedule ahead of him for 2019 and Porsche are keeping him in their sights.

“For 2019, I plan to drive a GT4 endurance series in Germany which begins at the end of March. As well as this, the events that Porsche Motorsport has invited me to will be a highlight of the year! I will be attending the Porsche Mobil 1 Supercup on the weekend of the Formula 1 in Barcelona, where I will be recieving some media training and following this, I’ll be at the Formula E event in Berlin.”