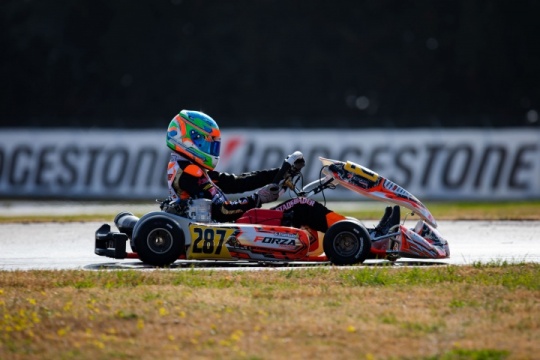 Competing with Arvid Lindblad (OKJ), Jonathan Weywadt (OKJ) and Gilles Stadsbader (OK), the team fought for victory in Junior with Lindblad at the height of a weekend he dominated, but the team obtained its podium in the Final B in Junior thanks to Danish driver Weywadt.

OKJ - Lindblad dominates practice and heats, Weywadt unlucky but on the podium

Arvid Lindblad, P4. The young driver of Virginia Water once again demonstrated his good form in this first part of 2019, his first year in OKJ, scoring the best time in the Qualifying Practices and winning all the heats, thus being the only driver with zero penalty points. Lindblad's great pace continued on Sunday, too, with the Prefinal A victory that placed him in pole position for the Final. In the latter, after a fight not without surprises, Lindblad crossed the finish line in 4th place, a race wherein he showed great tenacity in close combat.

Jonathan Weywadt, P2 (F. B). Weywadt's weekend was an uphill climb after a not very lucky series of heats. The Danish driver, after a good pre-final, was unfortunately hit by a penalty of 5 seconds on the final race time for incorrect spoiler installation, which relegated him to Final B. Here, too, however, Weywadt did a great job and won himself 2nd place at the end of a very intense race.


OK - Stadsbader near the top20

Gilles Stadsbader, P22. After being absent at the Winter Cup and the Lonato round of the Super Master Series, Stadsbader found himself facing a very tough challenge on a super- technical circuit like the La Conca track. After obtaining a 27th time in Qualifying Practices, the Belgian driver recovered 7 positions during the heats, finishing 19th. Having filed away P11 in Prefinal A, Stadsbader fought hard in the Final, ending near the top20 to finish in 22nd position.

Jamie Croxford, Team Owner: «It's been a very intense weekend. The performance of our Junior drivers has once again demonstrated the good job the team's been doing. I was positively impressed by Arvid's weekend drive, always first, and Jonathan who never gave up. Even Gilles, despite the lack of experience on this track, showed great progress during the race weekend.»

The next, and last, appointment of the WSK Super Master Series is scheduled for the weekend of March 24th at the Naples International Circuit.