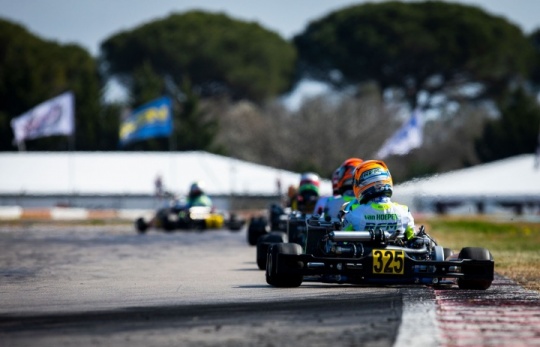 The Ricky Flynn Motorsport Team driver, after finishing qualifying in 26th place due to traffic, closed the series of 4 heats in 21st position, a result that could have been certainly better without the 19th place in the last heat (A / D) due to the 5-second penalty for spoiler release.

The turning point came on Sunday when van Hoepen obtained 5th row on the starting grid of the Final thanks to a brilliant Pre-ﬁnal. Then in the Final, the young Dutchman fought strenuously for a top5 spot, finishing in 7th due to having to widen a trajectory for an opponent in the closing stages of the race.

Laurens van Hoepen: «Compared to the Lonato race, progress has been evident. There is a bit of regret for the qualification in which, while I was doing a very fast lap, I found myself in front of two slower drivers who did not allow me to complete the job. The rest of the weekend was all uphill and, eventually, if I look at how the week had started, I can be satisfied. From now on, our goal will be the podium, which has so far been lacking due to unfortunate events.»

Van Hoepen has already completed several practice sessions at the Naples International Circuit, which next weekend will host the final act of the WSK Super Master Series, and in two weeks the first round of the WSK Euro Series.