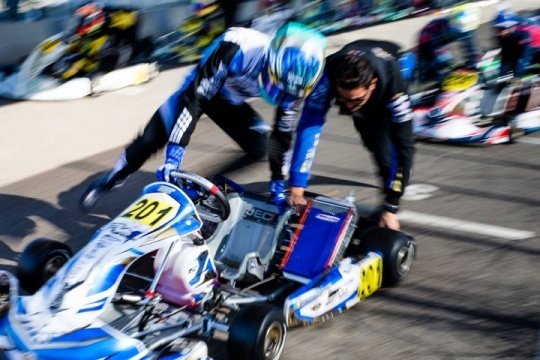 Author: Vroomkart International
The WSK series arrives at its third round, penultimate before Sarno's grand final.
On the Apulian track of Muro Leccese, the third round of the WSK Super Master Series is staged this weekend. After Adria and Lonato all drivers of 60 Mini, OK and OKJ return to the track ready to take up the battle for the top of the general standings.

60 Mini - Al Dhaheri tries to escape
In the youngest class, Rashid Al Dhaheri tries to escape towards the final success. With 176 points, the UAE driver leads the general thanks to two solid weekends now filed away. Apparently far away but still vying for success, the Belgian Ean Eyckmans is in second place with 116 points. The possible two-way fight intrigues all, without excluding the tight fight between Alex Powell, Akshay Bohra and Andrea Filaferro, respectively in third, fourth and fifth place.

OKJ - Antonelli leads, Ten Brinke tries to overtake
More than ever combative, the Junior offers interesting themes for the upcoming FIA season. Andrea Kimi Antonelli holds firm his first position in the standings with 94 overall points, despite the retirement in the final in Lonato when the Italian was in command. Only four points back, Thomas Ten Brinke is at 90 points total, thanks to the podium in the previous weekend. Closing the virtual trio the Brazilian Birel Art driver, Rafael Camara, no points in Lonato but victorious in the first race in Adria.
Top five ends with Jamie Day (81 pnt), fresh winner of the second round, and rookie Robert De Haan, rather solid in his first runs.

OK - Travisanutto vs Patterson
The OK World Champion, Lorenzo Travisanutto, continues his climb towards success in Senior. The constant and competitive Italian certainly did not disfigure even in the second round of Lonato, bringing his points to 151 points total. Despite the hegemony, Travisanutto will have to watch his back from the return of the excellent Dexter Patterson, who's soared to 128 points after his recent victory. Surprise in the general classification, Dino Beganovic in his first season in OK with 94 total points. Completing the top five positions, Taylor Barnard and Kas Haverkort in fourth and fifth place.

Appointment then to the weekend starting from free practice and qualifying scheduled for Friday 8, qualifying heats for Saturday 9, closing with pre-finals and finals on Sunday 10 March.