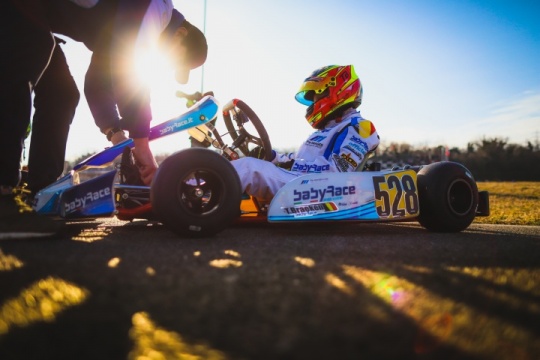 Press Release by: Tom Braeken
A big crash prevented Tom Braeken to gain a good result in Lonato.
Tom Braeken's retirement in the final does not give him the credit his potential had shown in the 2nd act of the WSK Super Master Series at the South Garda Karting in Lonato.

On his debut at the Brescia circuit with a totally dry track and slightly warmer temperatures than the races disputed so far, the Belgian had started the weekend in a positive way with the 7th best time in the 3rd qualifying group; in 19th absolute.

A result he improved upon during the Heats where Braeken, despite a 13th (due to a 5” front fairing penalty that ruined his 8th in the race) and a 15th place, closed 16th, thanks to three top10 results.

The Baby Race driver's weekend, however, was an uphill struggle on Sunday due to a crash in the last heat, which relegated him to 15th place, and one in the Final. The latter, unfortunately, forced him to retire after a few hundred meters from the start of the race in which he began in 14th place, just behind the top 10.

Tom Braeken: «Despite the result I’m happy because I’m improving race by race despite my not having so much experience with Karting in Italy. Talking about the weekend, in the first days of the race, thanks to the strenuous work of the Baby Race team, I got very positive results. Unfortunately, the same did not happen on Sunday when two contacts ruined my weekend. Fortunately I, nor Dion and Francesco suffered any serious consequences; what happened in the Final was scary, but unfortunately this too is part of motorsport.»

Braeken will now take a few days off before leaving for La Conca World Circuit where he will compete in the 3rd act of the Super Master Series. Here, too, it will be a very interesting challenge, considering the difficulty level of the track and the fact that he is at his debut at the circuit.