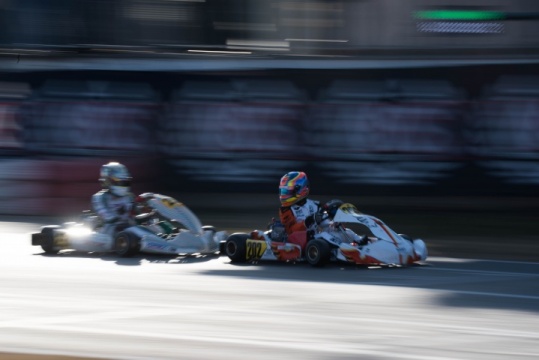 Author: Vroomkart International
WSK Sunday did not disappoint expectations, so we had yet another round of close combat for the title, after the first round in Adria. With the beginning of the season for the queen class, too, four were the winners today starting with Al Dhaheri (60 Mini), Day (OKJ), Patterson (OK) and Renaudin (KZ2).
60 Mini - Al Dhaheri wins, backmarkers crash
The final of the youngest drivers was characterized by the long red flag waved after a few curves from the start. A big fright for Breaken (Baby Race) who ended up spinning and Soldavini (Novalux). The latter could not help but collide in full with his rival, flipping shortly thereafter. After the red flag and medical aid, conditions were set for a race restart.
A Final of seven effective laps without too much emotion ended with with Al Dhaheri (Parolin) the winner at the photofinish under the checkered flag, second place for Ean Eyckmans (Baby Race), third was the first of the Italians, Andrea Filaferro (Newman). Nothing doing for Alex Powell (Energy), fourth at the finish after having worried Al Dhaheri throughout the race. Closing the top five was Akshay Bohra (Kart Republic). Of note, the best comeback in the top 10 went to Michael Ider (DR) with fourteen positions gained, ending in P10.

OKJ - Bedrin-Severiukhin self-destruct; Day takes advantage and wins
The OKJ Final kept all teams and fans focussed right up to the very last lap. Having started superbly, Andrea Kimi Antonelli (Rosberg Racing) tried to run off and create a gap, thanks to the excellent pace shown. After seven laps in the lead, the first plot twist belonged to the Rosberg Racing driver who suddenly had to say goodbye to the race and hopes of victory, flagged for the detachment of the rear spoiler.

Having again passed into the lead after dominating Saturday's heats, Nikita Bedrin (Tony Kart) continued the race keeping the charging Artem Severiukhin (Ward Racing) at bay, the latter very much at the forefront of the Adria weekend. Clash at the top of the two that, in fact, animated the whole race until the second plot twist on the penultimate lap. The extremely close fight got too close – contact, fatal for both, with bothing ending off the track on the straight before the mechanics' stand.

Watching was Jamie Day (Lennox Racing). He took advantage and passed into the lead, triumphing a few corners later. The Briton gained as many as eight positions from his starting position, finishing ahead of Thomas Ten Brinke (RFM) and Andrey Zhivnov (Kosmic). Fourth and fifth were Ugo Ugochukwu (RFM) and Alfio Spina (Kart Republic). Of note: Arvid Lindblad (Forza Racing) with fourteen positions gained to finish in P7, Cristian Bertuca (Birel Art) in P12, and Lorenzo Ressico D'Aloisio (Birel Art) finishing behind him with seventeen and twenty-one overtakes respectively.


OK - Patterson wins in comeback, Beganovic makes up for the mistake at start
Dexter Patterson (Kart Republic) won the OK Final of the 2nd act of the WSK Super Master Series beating the competition of poleman Lorenzo Travisanutto (HTP Kart Team) and Dino Beganovic (Ward Racing). The Scot, starting in 9th, was able to make his way up to complete the tandem formed by Noah Milell (Tony Kart) and Travisanutto himself, who in the final had to surrender to the 2017 OKJ World Champion.

The first beats of the race had seen the confrontation between Travisanutto and Milell with the latter, after  finishing onto the “dirt” due to the entry of Patterson, slipped off the podium closing in P5.

Taking advantage was Beganovic who, at the start, had not exploited his first row to the fullest, falling back. Ward's spearhead in OK, however, thanks to a very solid performance, then managed to catch up to make the podium.

4th was Taylor Barnard (Rosberg Racing) followed by Genis Civico (Croc Promotion) who made his team manager Armando Filini proud. Finally, great comeback for Dilano van T'Hoff (Forza Racing), 12th on the finish line with a total of 21 positions recovered from the start. The Dutchman, after a great Saturday, had fallen to the margins of the qualifying zone for the Final due to a penalty for the release of the spoiler matured in the Pre-final.

Along the 21 laps disputed, there were several changes at the top. The first surprise was at the start, since the poleman Lammers was unable to exploit his starting position, ceding his place to Paolo De Conto (CRG).

In the first part of the race, the former world champion had to deal with a fighting Alex Irlando (Birel ART) who, due to the tussle, then fell to 8th place. Renaudin was the first to benefit, but also Kremers. With the development of the race the two climbed to P1 and P3, with Lammers in the middle.

In the final, the latter failed the decisive attack for the leadership, although it seemed he'd have done so at any moment; as it was, Renaudin celebrated his first triumph as a Sodi factory driver, followed by the same Lammers and Kremers.

After the start of the trophy celebrated in northern Italy, the Super Master Series will head south to the La Conca World Circuit on the weekend of 7 March.