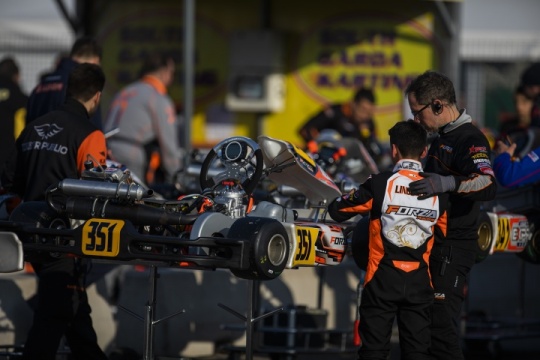 In a Winter Cup characterized by the Super Heat system, in place of the Prefinals, where the "score" of the Super Heats were added to that of the heats, the best placings came from Lindblad, 14th with 4 positions recovered, and van T 'Hoff, 16th with an improvement of as many as 16 positions compared to the start.
OKJ
Dunne unlucky, Lindblad and Huang: what a comeback!

Alex Dunne - The Irish driver's weekend "took off" in the heats where he landed 2nd position thanks to a win and 3 second places. Starting in pole position in Super Heat 2, Dunne finished 8th. This placed him in 5th position on the starting grid of the Final; alas, on the second lap, while in the group fighting for the podium, a contact of which he was without fault forced him to retire.

Arvid Lindblad - After the 13th position of the Qualifying Practices, the British driver closed the heats in 24th, his points influenced by a 18th place in the last disputed due to the 5 second front fairing penalty. The 5th place gained in Super Heat 2, however, allowed him to get into the top 20, securing the 18th position on the starting grid of the Final. At the end of the 18 race laps, he crossed the finish line in P14 with 4 positions recovered.

Xizheng Huang - The Chinese driver was immediately taken notice of, despite being at his first experience with Forza Racing. Huang, after a gradual improvement over the weekend, not only achieved qualification for the Final, but also managed to close in the top 20, in 18th place, with as many as 16 positions recovered.
OK
Van T'Hoff makes his mark despite missing practices, Stadsbader near top 20, Karithonov missing out on Final

Dilano van T'Hoff - The 16th final position tastes sweeter than expected for van T'Hoff, who came to Lonato's South Garda Karting just in time for Friday's Warm Up. Despite having skipped all the previous practices, Dilano made himself the protagonist of a weekend all in progress, that culminated with the 16th final position and as many as 16 positions gained compared to the start of the Final.

Gilles Stadsbader - After the break of the first round of the WSK Super Master Series, the Belgian continued his apprenticeship with the Senior class. Stadsbader's pace consists of P31 of qualifying, improved in the 30th after the heats and in the 27th at the end of the Super Heat. Also in the Final he continued to make progress, crossing the finish line in 24th position with 3 places recovered from the start.

Tikhon Kharitonov - The Russian driver, due to a series of unfortunate episodes, failed to reach the Final qualification. Despite this, however, Karithonov continues in his path of adaptation to the queen class of single-speed karting.

Jamie Croxford, Team Owner: «It was a weekend with mixed feelings. Our drivers responded well as far as speed was concerned, but some unfortunate incidents did not allow them to maximize the potential they'd shown. In any case, I want to congratulate all the staff and the drivers themselves for the spirit and professionalism with which they face every race weekend.»

Forza Racing will remain in Lonato for the second act of the WSK Super Master Series, scheduled this weekend.