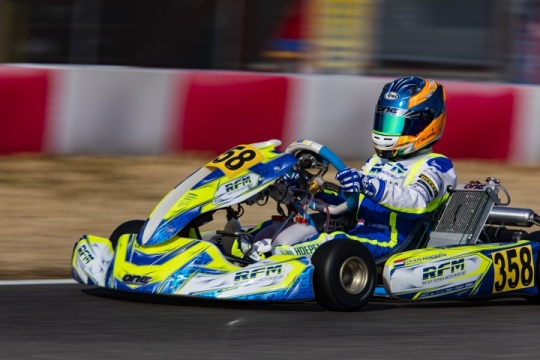 The driver of Ricky Flynn Motorsport, in fact, over the weekend of the South Garda Karting was able to recover 34 positions, ending the race just off the top 10, that is in 13th place.  Van Hoepen's Winter Cup started not without difficulties in the Qualifying Practices, where he ended in P47.

From that point on, however, the Dutchman reversed the negative trend, closed the heats in P25. This result, added to the 7th position of the Super Heat, guaranteed him the 22nd place on the starting grid of the Final, where he then managed to climb 9 places, closing 13th.

Laurens van Hoepen: «It was a tough weekend, but we managed to do something good, bringing home another good comeback. Once again we have shown that we have the potential. We just need to improve the qualification and then we are ready to fight for the top levels of the classification. This will be our goal in the second round of the WSK Super Master Series.»

With hardly enough time to pack and unpack, and Laurens van Hoepen will already be called to again defend the colors of Ricky Flynn Motorsport in the second act of the WSK Super Master Series, waiting for him this weekend, again in Lonato.