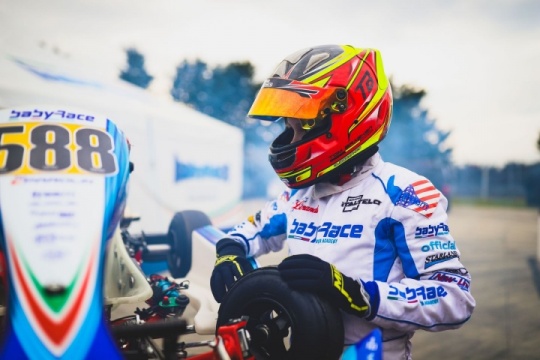 After the productive parenthesis of the Adria Karting Raceway, where he put on a good show despite it being his first experiences in Italy, the Belgian driver is now ready to approach the South Garda Karting for the first time this year.

The conditions for doing well are there, given the qualities he has shown so far and the undoubted professionalism of the Baby Race team; but Lonato will be an important test also because it promises to be a totally dry weekend, the first since Braeken runs in Italy.

Tom Braeken: «These weeks, during which I continued my training sessions, were useful to reorganize my ideas in view of the Lonato event, which will be a very important challenge for me.The objective is to learn as much as possible in the practice sessions and then start attacking in qualifying. I'm impatient to start the weekend.»

As usual, the event's official "gong" is scheduled for Friday with Qualifying Practices, followed by the heats. On Sunday, the final rush with Prefinal and Final.

Throughout the event the Live Timing service will be available and on Sunday the video images will be transmitted through Live Streaming on the website www.wskarting.it