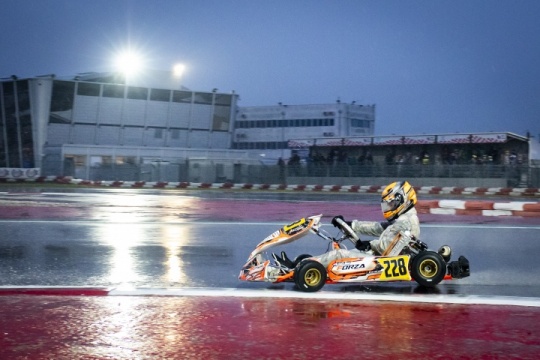 Both in OKJ and OK the team was among the eligibles for podium positions given the excellent results, including the 1-2 in Junior, scored in the season’s opening round, the WSK Champions Cup.

In a race characterized by changing weather conditions, with heavy rain in the first days of competition and dry asphalt on Sunday, Arvid Lindblad, Alex Dunne and Jonathan Weywadt were the team drivers in OKJ, while representing Forza Racing in OK were Dilano van T ‘Hoff and the returning Tikhon Kharitonov, at his first appearance of the season.

OKJ – Lindblad again stands out, Dunne and Weywadt slowed by a contact and a technical problem

Arvid Lindblad – The Briton, after the 2nd place in the Champions Cup, re-confirmed being one of the fastest of the lot. Lindblad’s weekend began with the 6th time in Qualifying Group 1, the 12th overall then improved to 9th of the heats. In this case, only the 11th place of the second heat prevented him from further improving. On Sunday, the 6th place in Prefinal A placed him in the 6th row for the Final, where he was able to gain 7 positions to close the race in 5th.

Alex Dunne – On the strength of his Champions Cup victory, Dunne showed up at the Super Master Series with the aim of continuing his positive streak. An aim confirmed by the 7th place in Qualifying Group 1, on an extremely wet circuit. The Irish driver’s progress was however impeded in the heats by a retirement and a penalty in the penultimate, which relegated him to 30th place at the end of the clashes. Starting from the 9th row in the Final, his comeback was slowed being hit by a rival, which prevented him from going beyond the 18th spot.

Jonathan Weywadt – The Dane, engaged in the process of adapting to the size and power of the Junior, was faced with an important test due to the difficult conditions of the circuit, which saw rain alternate in the early days and dry in the final phase. Weywadt managed to qualify for the Main Final; alas, an inconvenience prevented him from taking home an important result.

Dilano van T’Hoff – After the positive debut of the Champions Cup, here too at the Super Master Series van T’Hoff gave proof of his talent by closing 6th overall at the end of a qualification in what were difficult conditions. The Dutch driver improved in the heats, finishing 3rd overall with a victory. The 1st place in the Pre-Final raised hopes for the Final, where however a small problem prevented him from expressing his talent and prevented his going beyond the 7th place.


Tikhon Kharitonov – The difficult conditions of the Adria Karting Raceway did not intimidate the Russian, protagonist of a weekend in crescendo. From the 16th place of qualifications, Karithonov finished 15th in the heats and 4th in the Prefinal A. A jam-packed Finale, then, saw him finish 22nd on a weekend where, however, he showed a good adaptation to the Senior class.

Jamie Croxford, Team Owner: «Considering that it’s only the second race of the season, it was a fruitful weekend from the point of view of learning. The drivers, in fact, were put to the test by changing weather conditions and I have to admit that everyone reacted well.»

The next appointment for the Team is the Winter Cup, scheduled at South Garda Karting in Lonato (Brescia, Italy) from 14 to 17 February.