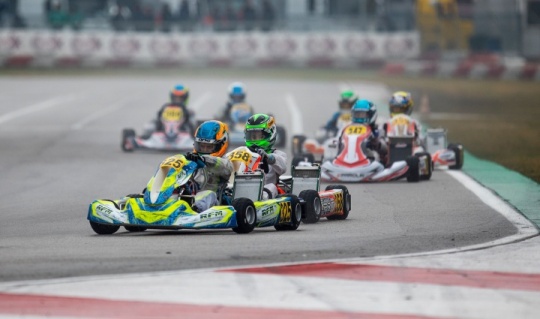 Press Release by: Laurens Van Hoepen
Despite the problems suffered in the Qualifying Practices of WSK Super Master Series round opening in Adria, Laurens van Hoepen won the Final B with a great comeback.
A small electric problem in qualifying and a retirement in Prefinal B spoiled the first round of the WSK Super Master Series for Laurens van Hoepen.

At the Adria Karting Raceway the Dutch driver suffered some bad luck, which prevented him from fighting for the top positions in qualifying where, because of the aforementioned problem, he ended up in last place.

From that moment on began the game of catch-up for the Ricky Flynn Motorsport driver who in the Qualifying Heats gained 32 positions and finished 28th. In Prefinal B, despite the traffic, van Hoepen managed to make further gains only to retire on the last lap.

This event definitively stopped him from entering the Main Final, relegating him to the 15th position on the starting grid of the Final B. In it, the young driver offered significant proof of his talent, winning the race with a gap of over 5 seconds on the second-placed driver after having recovered as much as 14 positions.

Laurens van Hoepen: «There’s a bit of disappointment with the problem in qualifying, but it's part of the game. With the team, we didn't lose heart and made a good recovery. Without the problem in the Prefinal we'd have obtained something important even in the Main Final, but however the victory in Final B makes me confident for the future. I'm sure we'll be playing for important stakes.»

Van Hoepen will be back on track at the Lonato Winter Cup.