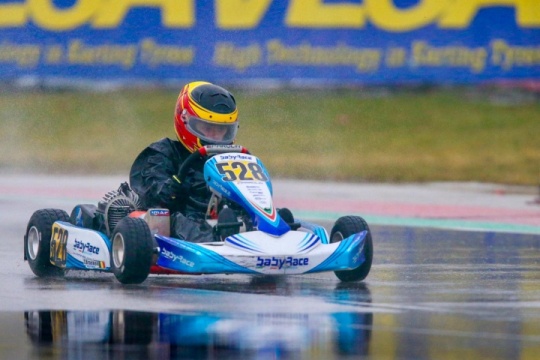 The Belgian, in fact, finished 12th in the Final B, with a total of 21 passes compared to his starting position: 33rd. The result gains even greater importance, considering that for Braeken it was the first time in Adria with such difficult weather conditions, characterized by heavy rain on Friday and Saturday and by an asphalt that was drying progressively during the Final.

The Baby Race driver, at his second appearance in the WSK races, started the weekend extremely positively with his 3rd place in Qualifying Group 2, the 8th overall.
The excellent work of the driver and the team continued also in the heats, where only a retirement in the last heat deprived him of the top10, relegating him to 28th position. Another withdrawal in the Pre-Final, also due to a technical problem not attributable to the team, put him definitively out of contention for Final A.

Despite the misfortune, however, Braeken did not lose heart; he put on a great show with plenty of overtakes in Final B, finishing just off the top 10, that is, in 12th.

Tom Braeken: «It was a very difficult weekend due to the weather conditions, but I never lost heart. The team has provided me with a really excellent kart and this has allowed me to excel through the field. The two retirements don't depend on the team, but these are unfortunate circumstances. Karting, and motorsport, is also this. We leave Adria with the awareness of having learned a lot in these three weeks. I thank the Baby Race team for the work and professionalism that they are offering me.»