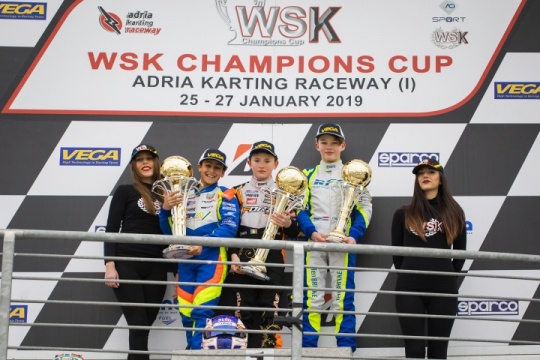 Author: Vroomkart International
In Adria we met Alex Dunne and we talked about his season start.
The 2019 season opened with a nice surprise for the Forza Racing team, which brought home a "1-2" in the WSK Champions Cup of Adria.

Leading the 1-2 was Alex Dunne, the Irishman on his second year with the Jamie Croxford team, who put into practice a very smart strategy to beat the competition of Andrea Kimi Antonelli and James Wharton.

Racing without exaggerating and immediately ruining the tires, Dunne knew how to wait for the right moment to make his move, overtake his two opponents and then exploit the fight between the two to gain the necessary space to administer the race. At the stroke of the 16th lap Dunne expressed all his joy with a win, while behind him Arvid Lindblad completed the job for Forza Racing with second place.

In Adria we had a chance to meet and talk with Alex, with whom we retraced the steps of the victory and the first round of the Super Master Series.

Let's start from the WSK Champions Cup victory. How did you feel about crossing the finish line in 1st place?

«There are no words to describe it. It was an important victory for me as a driver and also as a person. From the beginning of the weekend we knew we could compete for an important result, especially for the pace we showed during practice».

In fact, it was also clear from the results obtained during the weekend that you had a lot of potential, but in the Final you brought out something extra. Did you use a particular strategy?

«My strategy is always the same: head down and accelerate. In this case, however, we knew we had to deal with drivers as fast as me, who also started in front of me. For this reason, before launching the decisive attack I studied the moves and saved the tires in view of the decisive attack. It can be said that it worked».

Regarding the race of the Super Master Series, we were faced with very different conditions compared to the Champions Cup. Did you have to change your approach?

«No, I wouldn't say so. On the contrary, it's essential for a driver to always maintain the same approach and adapt to climate change or asphalt. And that's what we did this weekend. We also had a good pace but we were a bit unlucky. In the Final we had started well, passing several drivers, but a contact made me slip back a bit. I can, however, say that I learned a lot from the race».

Before being a driver, you're a young boy. For a young person like you, is it difficult to spend so much time away from home?

«If I were doing something that I didn't love, yes. But I love driving and no, it's not difficult at all, in fact, when I'm too far away from the track, I start to miss it. Sometimes they ask me if I ever thought about doing something different but no, I just like driving». 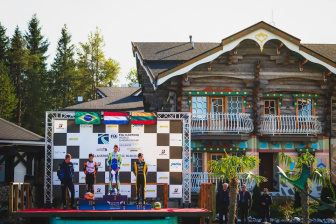