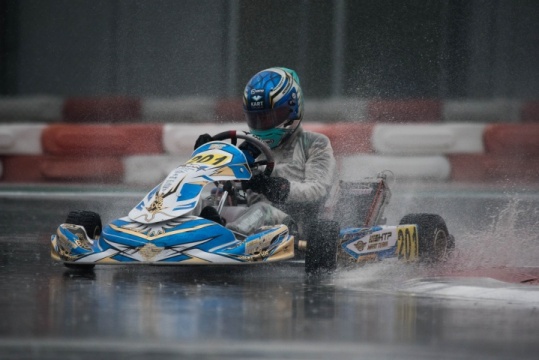 Author: Vroomkart International
The results of the Finals of WSK Super Master Series first round placed in Adria.

A Sunday with mixed weather conditions made the final phase of the first round of the WSK Super Master Series particularly spectacular.

At the Adria Karting Raceway, in the end, the winners were Rashid Al Dhaeri, Rafael Camara and Lorenzo Travisanutto.

At the ready, thanks to a not perfect start by Dilano van T'Hoff, Kas Haverkort  maintains the leadership. Soon a problem with the rib-protector causes not a little difficulty to van T'Hoff, who slowly slips behind. Dexter Patterson moves ahead, stems the escape of Haverkort and passes him at the entrance to the long left that leads to the central sector of the track.
Even Patterson, however, is soon forced to give in to the attacks of a relentless Lorenzo Travisanutto. The latter, starting in 7th, takes 13 laps to move through the pack and take the first spot. Behind the leader, a three-man fight for the podium with Harry Thompson, Haverkort and Patterson. Thompsonis ahead, after starting from the 27th position. The release of the spoiler, however, deprives him of the joy of the podium, relegating him to 5th. 2nd and 3rd, therefore, go to Haverkort and Patterson.

OKJ – Camara surprises
The Junior weekend does not disappoint the great expectations. The wet weekend of Adria had completely upset the results right from the heats. Difficult conditions for all the drivers, who then gave life to a Sunday of Finals that hardly obvious, especially thanks to the gradually drying asphalt. Solid throughout the event, Rafael Camara surprised everyone with am incredible pre-final, useful for the pole position in the Final. The decisive sixteen laps allowed the Brazilian to aim for the big prize, fighting lap after lap for the final victory. The success, also thanks to the fight between Sobrepera and Siverholm, has literally launched the Birel Art driver at the head of the first general classification. After the penalty imposed on Sobrepera (all-too-aggressive move against Siverholm on the last lap), second place for the winner of the Rotax Grand Finals, Robert De Haan, third the excellent Thomas Ten Brinke with ten positions gained. Marcel Kuc and Arvid Lindbland, in fourth and fifth place respectively. Sixth place for Andrea Kimi Antonelli, leader of the initial stages, top ten for the Italian Rok Junior Champion, Paolo Ferrari with eighth place. Worth mentioning are the 23 and 20 positions gained by James Wharton and Marcus Amand, both in the top ten.

Final B.
Laurens Van Hoepen, among the top out of the Final A, wins in the B with an excellent race pace. Second place for Vinicius Tessaro, a good five seconds behind, third Miron Pingasov. Positive weekend for Cristian Bertuca with the ninth place finish, first of the Italians.

60 Mini-Al Dhaeri comeback, wins and convinces
Rashid Al Dhaeri sends a clear signal to the competition for 2019. The driver of the United Arab Emirates triumphs in the final Mini with seven positions gained and three seconds ahead of the direct competitor for the success. Silver medal to the oft-seen Ean Eyckmans, bronze for Maksimilian Popov. The first five final positions are completed by Alex Powell and William Macintyre.

Final B
Andrea Filaferro again takes the stage with the second success in a row after the Champions Cup. Stratospheric return that of the Italian with 29 positions gained compared to the starting position. Podium completed by Nikola Tsolov and Daniel Krausz.

Appointment therefore at the second round of the WSK Super Master Series in Lonato (February 24, 2019).