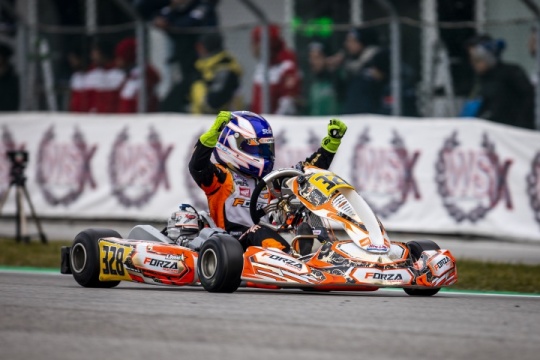 Authors of the result were Alex Dunne and Arvid Lindblad, Alex having already made his mark in Junior in 2018, while for Arvid it was the latter's first official exit with the colors of Forza Racing. An encouraging debut also for Jonathan Weywadt, at his very first experience in OKJ.

In OK, instead, a good first race for Dilano van T'Hoff, while Gilles Stadsbader had to deal with a complicated qualifying session that forced him to make that extra effort for the rest of the event.

Alex Dunne - After the 8th place in qualifying, the Irish driver's weekend took the right turn during the heats where he finished in 4th position, also thanks to a victory. In the Final, starting from the 2nd row, Dunne took first position and subsequently distanced his opponents with icy determination.

Arvid Lindblad - The British driver's adventure started immediately in a positive way with the 5th position in qualifying. After the 8th place in the heats and the 4th of the Prefinal, Lindblad put in a great job in the Final, passing 5 opponents and taking 2nd place to complete the Forza 1-2.

Jonathan Weywadt - Forza Racing's newcomer, after gaining confidence with his Exprit/TM by GFR Engines in the early stages of the weekend, was the author of a remarkable comeback in the Final: he started in P29 and finished in P19 - 10 positions gained!

Dilano van T'Hoff - The process of adaptation to the Senior class for the Dutch driver proceeds without hindrance. In fact, Van t'Hoff confirmed the good impressions that he had aroused in the last part of 2018, archiving the season's first weekend with his 5th place finish, after scoring P3 in qualifying and P4 at the end of heats and Prefinal.

Gilles Stadsbader - After the 16th place in qualifying, the Belgian finished the heats in 20th position. A good Prefinal, then, saw him rise from the 20th to the 12th position; a result that boded well for the Final; alas, some inconvenience prevented him from going beyond P 17.

Jamie Croxford, Team Owner:  «It's been a very positive weekend, where all our drivers have shown they have potential. I'm very happy for the double win in Junior, which crowns a consistent effort by the whole team. Now it's important to stay focussed and try to replicate these results as much as possible.»
The Forza Racing season will continue with the first round of the WSK Super Master Series scheduled this weekend in Adria.