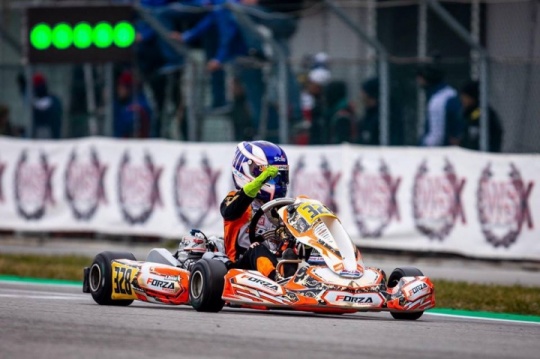 Author: Vroomkart International
The 2019 Champions Cup provides the year's first verdicts. Taylor Barnard (OK), Alex Dunne (OKJ) and Andrea Filaferro (60 Mini) triumph in Adria.
At the end of the pre-finals staged in the morning, a great show with the category's finale, valid as the first tastings of the new year.

OK - Barnard starts with a bang
After dominating his pre-final, the new driver of Rosberg Racing, doesn't mistake the first final of the new adventure in OK. A capital performance, the British driver's, never under discussion during the twenty total laps. Confirming these performances, Barnard could right from now pick up Lorenzo Travisanutto's baton. In second place, Gabriele Minì begins the season with his first masterpiece, the talented Sicilian recovering from fifth place to the sound of surgical strikes and passes, beautiful the tussle for the second place completed just three laps from the end. Bronze medal and many smiles for the excellent Cristian Comanducci, third at the end of the race after a weekend at the highest level, especially as regards performance. In the top five Danny Carenini recovered well with four positions, followed by Dilano Van T Hoff, first of the Forza Racing drivers. Of note, the furious recovery of Lorenzo Travisanuto from last to tenth with fifteen positions gained after an adverse pre-final. Retirement for one of the noteables in the first phase of the race, that is Harry Thompson, truly fast on Saturday, but unlucky in the morning; same for Dexter Patterson, thanks to a race contact.

OKJ - Dunne and Lindbland, one-two for Forza
The Junior gives emotions for the entire duration of the race thanks to the continuous reversals in front. Andrea Kimi Antonelli makes the most of the pole position keeping the lead of the race well, the advantage of the Italian then thwarted by the tussle with James Wharton and Alex Dunne. Relentless battle between the three for the duration of the race; in the Dunne manages to overtake his opponents, taking advantage of the brawl. The Irishman makes no errors from the sixth lap on, closing with two positions recovered from the start, thus adding the first trophy of the year to his collection. For the second and third place it seemed a two-man fight when, shortly before the end, the new purchase of Forza Racing, Arvid Lindbland jumped into the party, followed by Thomas Ten Brinke. The key episode happens on the last lap when Antonelli brakes very late on Wharton, lengthening the trajectory and allowing Lindbland and Ten Brinke to climb respectively on the second and third step of the podium. Hence, top five with Antonelli, fourth, and Wharton in fifth. Of note, the comeback of Brando Badoer with his tenth place finish.
Final B.
In the final stands the interesting fight between poleman Cristian Bertuca, Alessandro Cenedese and Vinicius Tessaro. A war of attrition among the three contenders for all ten laps; in the end Tessaro wins; Bertuca is second at his first appearance in OKJ, third place for Cenedese.

60 Mini - Filaferro supremacy
Starting from the second row, the 2018 Italian Cup holder, Andrea Filaferro, defeated the competition already at the start. A start right from the manual, the Italian's, able to immediately slip into the corner of Curve One, immediately taking the lead of the race. A three-way fight with Rashid Al Dhaheri and Francesco Marenghi, perfectly managed by Filaferro then triumphant under the checkered flag. Silver medal for Marenghi, competitive on the Adria track, third Al Dhaheri among the most expected of the weekend. Positions gained, a masterclass by Lukas Malek, with sixteen overtakes and his fifth place finish; nothing to do for Ean Eyckmans and Alex Powell, respectively in sixth and ninth place, 14th for Flavio Olivieri, while Coskun Irfan was out of the race.
Final B.
A win for Edgar Anpilogov ahead of rivals Matteo de Palo and German Foteev, both authors of a comeback.